Upscale burger restaurants where the diner gets to personalize their hamburger with their choice of condiments, toppings, cheeses, etc. are all the rage right now. Roseville has had The Counter burger bar for a couple months now, El Dorado Hills has Relish Burger Bar, Smashburger has expanded into Sacramento recently, and SRO, the owners of 33rd St. Bistro, Riverside Clubhouse, Suzie Burger, etc. recently announced they were turning Bistro 33 midtown into Spin Burger Bar. (As a side note, if you're looking for their motivation, while most restaurants including fine dining establishments like French Laundry see gross margins in the single digits, high end burgers can fetch margins of 35 percent. See this Wall Street Journal article for more info.)

My fiancee and I decided to give Spin Burger Bar a try on Saturday evening for dinner at about 6:45 p.m. Immediately, if you had visited the restaurant when it was still Bistro 33, the place seems familiar. The skeleton of the restaurant and bar remain the same, but the room has undergone a makover. Gone is the ultra lounge concept, and in are bike-related decorations. I thought the spinning wheels and gears on the ceiling were a great touch.

When you see the menu, it can be immediately overwhelming. If you're used to a burger place like In-N-Out where the choices are few and simple, you may need some time to fully grasp the menu which offers a choice of 10 cheeses, 13 toppings and 16 sauces. Physically, the menus are a a sticker on the back of an old vinyl record album case, and the drinks were in a slide out page where the record would go. I thought it was an unique touch.

We settled on the fried pickles with a sirracha dipping sauce, my fiancee had the "Double D" with a side of Sweet Potato Fries and I had a "Spin Burger" with White Aged Cheddar and added "Crunch It," which the waitress explained meant that a thin layer of fried onion strings shoestring fries were added to the burger to give it an additional texture. 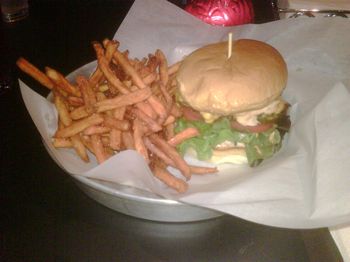 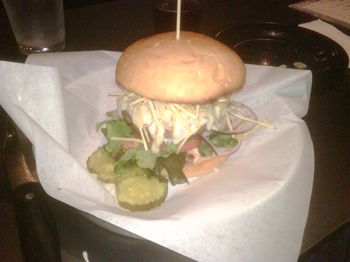 Spin Burger with "Crunch It" Option

Our fried pickles came out in about 5 minutes. They were sliced lengthwise, dipped in a batter and fried. We got a half dozen fried slices or so for $6. As a fan of all things fried, it tasted good, but they were a little greasy. By far, the best thing about the dish was the siraccha ranch dipping sauce. I wish we would have asked for more dipping sauce to be used with our sweet potato fries.

Then we started waiting for our burgers. And waited. And waited. I don't have an exact length of time that it took for our entrees to come out, but our best guess is about 20 mins, or long enough for us to eat the appetizers, drink our beers and wonder where our food was. The restaurant wasn't slammed either. There were about a dozen people eating at the restaurant. I understand the restaurant is new and its working out the kinks, but they only really have one thing on the menu - burgers. How long could it take?

When the burgers did finally come out, we thought they were really good. The meat was juicy and the buns were fresh. The produce was excellent, and we both enjoyed the extra texture that the "Crunch It" style added. But the wait left a bad taste in our mouths.

We had one other complaint, and it was with the menu. First, nowhere did it say that getting a burger "crunch it" style would cost an extra 50 cents. We didn't know that until the waitress told us after we ordered it. I would have gotten it anyway, but it should have listed that on the menu.

Since the core of this Web site is still happy hours, I'm happy to report that they will have a happy hour soon. They don't have the happy hour figured out yet, but I'll get it on Cowtwon Eats when they do.

Instant Reaction: I understand the restaurant is new and service is bound to be sketchy as they work through their new concept. Because their food was so good and because of its great location, I'll give it another try soon. But if their service doesn't get better, I don't know that any burger's worth that kind of wait.

Have you been to Spin Burger Bar? Share your thoughts below. If you're with the restaurant and want me to post a response to my Instant Reaction, e-mail me at Cowtowneats@gmail.com and it'll get added to this post.