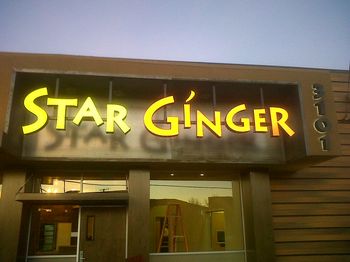 Star Ginger, Sacramento's new fast casual, Asian street food-themed restaurant, opened for lunch business on Tuesday. I stopped by yesterday to get an initial impression of the restaurant.

Let me first caution you that it’s unfair to make a final decision on a restaurant within its first six months in businesses. I grew up listening to famed restaurant critics Merrill Schindler and Elmer Dills on the radio, and their personal rule was to never review a restaurant in its first six months. Restaurants need time to grow and hit their stride – especially on the service end. My recent Instant Reaction to Spin Burger Bar really bears that out.

However, the six month rule was in the days of carbon paper and snail mail, so I’ll bend it a little and give my impression of the restaurant, but being acutely aware that things can and probably will change for the better.

I arrived for lunch at 1:15 p.m., slightly after the lunch rush. The 15-space parking lot of the former Togo’s was full, as was the 60 seat restaurant. I stood in line four deep eager to try their highly anticipated grub.

I ordered a lemongrass chicken bahn mi (Vietnamese sandwich) for $6. For those not familiar with the dish, it’s a baguette generally filled with pickled carrots and cucumbers (sliced the long way), cilantro, jalapeno peppers, mayo and a meat filling. Besides the lemongrass chicken, Star Ginger also offered bahn mi sandwiches with Thai BBQ Chicken, Slow Roasted Kurobuta Pork, Korean BBQ Niman Ranch Beef and a grilled vegetables. The options ranged in price from $6 to $6.75. See their entire lunch menu here.

I selected the lemongrass chicken sandwich because Star Ginger’s owner Mai Pham also owns a restaurant named Lemon Grass. I figured she’d know how to do it right. The woman at the counter who took my order suggested the Thai chicken bahn mi, which she said was the most popular selection.

As I sat and waited for my to go order, I appreciated all the work that Mai Pham had put into turning a generic-looking Togos into a modern, clean and spacious restaurant. Every one of the 60 or so seats in the restaurant was filled and there was a good energy to the place. The restaurant also features a communal picnic bench-style table as a communal table (a la the tables at Mausullo) for individuals to share, or for a large group to use.

But then I waited and waited some more. I checked my receipt and noticed that I ordered at 1:22 p.m. It was 1:40 p.m., and I still hadn’t received my sandwich. I knew they didn’t forget me since those who ordered before me still hadn’t been served.

Finally, 23 minutes after I ordered my food, I received my sandwich. The lunch crowd had thinned, and I decided to eat my meal in the restaurant.

My first impression was that they were using good bread. The baguette was crusty on the outside and soft on the inside. The sandwich wasn’t smothered in mayo, but had enough for a taste. The chicken had great flavor and my first bite had a good bit of jalapeno, as it should have.

I was starving by the time I was served and devoured the sandwich in a matter of minutes, enjoying every last bite.

Star Ginger belongs in the good food, service needs work category. They clearly have good recipes, fresh ingredients and a winning formula, but they don’t have enough reps doing a lunch rush to get you in and out of the door in 30 mins. I saw Mai Pham in the back of the restaurant overseeing the operation, so I'm sure she's trying to figure out how to streamline things.

I will definitely try Star Ginger again. They serve a genre of food that nobody else does in downtown or midtown, they have a large enough menu so you won’t be stuck eating the same thing every time, and I’m hopeful their service will improve.

Star Ginger is located at the corner of Alhambra and Folsom. It's only open for lunch for the time being, but is expected to expand to dinner service soon.

Have you been? What do you think? Let us know in the comments.

The parking situation is TERRIBLE. Unfortunately, GOOD EATS is hogging several huge parking lots around the back (I really can't believe that they had that many customers in their store/cafe, as every spot was taken already) and those who are parked at Star Ginger are mostly dining "in", so parking turnaround is very slow to non-existent. I almost gave up and went elsewhere to eat.

Thai tofu salad was okay, not spectacular and the Buddha salad rolls were also okay. Neither would bring me back again, but I will give their other veggie dishes a try on another visit.