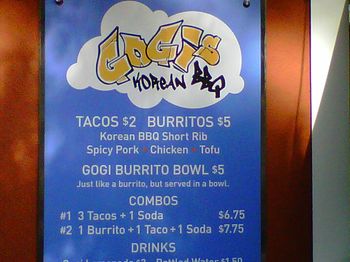 When reviewing Gogi, the new food stand at 15th and L, the question you have to ask yourself is whether Gogi tries to be a restaurant with good food or one that strives just to be profitable.

(For those who haven't heard, Gogi is housed in the former Park To Go kisok in the Mah Jong's/Cafeteria 15L and is Sacramento's attempt to emulate the wildly successful Korean BBQ tacos concept popularized by the Kogi food truck in LA.)

I'd have to say that Gogi strives to be a profitable business, and judging by the lines I stood in during lunch last week, it’s successful. But it lacks culinary ambition. During my meal, I sampled the Korean beef taco, a pork taco and its burrito bowl. The food had a familiar flavor in an unfamiliar form factor, but nothing stood out. The lunch I had was best described as average. It wasn't bad, but it wasn't something I would urge friends to seek out. 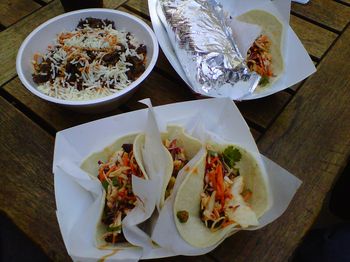 From what I can tell, menu consists of very few ingredients. I count nine items that make up all of its entrees.

To me, it’s kind of the Taco Bell philosophy to restaurants. Figure out how many different ways to combine the same ingredients into entrees and profitability ensues.

To give the owners credit, they've tried to do good food with Masons, but found it unprofitable and changed their concept to Cafeteria 15L's comfort food. Given that experience, it's logical that they went for profit this time.

But I can’t help but feel that if they put a little more effort into it, Gogi could be the type of restaurant that we could rave about.

Here are a couple suggestions:

I don’t mean to come down hard on this restaurant. The food is fine, but I see a restaurant and concept that could be really good, but hasn’t gotten there yet. I hope it does, and soon. I think Sacramento's foodies could support it.