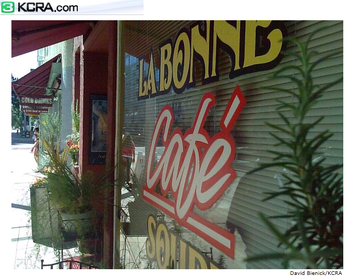 About four months ago, Pont felt such intense pain in his hips that he was forced to close the restaurant for five days. He could barely walk. He couldn't sleep. He had bursitis, an ailment made worse by standing all day.

"Being a one-man show, it was a wonderful six years. But the last year, I felt the pain. I realized I created it for myself. I had no freedom. I feel bad. I feel like I let people down," Pont said.

His last day was Friday. Read the entire story in the Sac Bee.

Sac Press’s Brandon Darnell has more on what’s happening to the restaurant.

He sold his business to a young couple, and he said much of it will remain the same, but he’s hanging onto his recipes.

“I advised them to keep the same concept because it works,” he said. “If I was 10 years younger, I would franchise (the business). I told them to make good food and be nice to the people, because without customers, you have no business.”

Read the entire story in Sac Press. Photo via KCRA.com.

Pain at the pump also hurting local restaurateurs - Rising gas prices are eating into restaurant and food supplier profits, and may soon nudge prices higher on local menus. Restaurateurs say they're trying to resist price hikes. They know more customers will opt to eat at home when they're paying more than $4 per gallon at the pump. Chris Macias in the Sac Bee.

Dining review: Pocket Bistro is headed right way - Edmund and Melissa Jade Abay met while working at P.F. Chang's in downtown Sacramento. Now, married with three kids, they thought, "Hey, let's give up the paid vacations and benefits, go into debt and open Pocket Bistro," a restaurant in a strip mall in the Greenhaven/Pocket area. Really, it's people like this who make the restaurant business exciting and essential. Will they be able to merge the fundamentals they learned at chains with their dream of running a cozy, singular and creative neighborhood hangout? Based on my visits: yes and no, with enough yes to give me hope. Blair Anthony Robertson in the Sac Bee.

Pause Lounge & Kitchen closes temporarily - Pause Lounge & Kitchen in Roseville is literally taking a pause in its business operations. The restaurant, which started bringing small plate food and artisnal cocktails to Roseville in December, closed on Tuesday and will re-open on May 4. Owners Lucas and Leyland Jacob Elia are using this time to revamp its menu. Chris Macias in the Sac Bee.

Counter Culture: Granite Bay gets to the Source for tip-top tapas - Source occupies the space of the original Toast restaurant in Granite Bay, which became the Quarry Ponds Cafe, then Toast again, and then closed. Now it has a new name and new owners. Expectations are high, as co-owner and executive chef Irie Gengler has served as executive chef at both Crush 29 and the Firehouse. "I look all around the world for the ingredients," he said on the phone later. As the weather warms, the delightful pond-side outdoor patio should begin filling. Allen Pierleoni in the Sac Bee.