About a month ago, Lounge ON 20 decided to revamp its menu and ecor. It brought in up and coming chef Pajo Bruich to revamp the food and slightly updated its interior to make it less like a club by adding a touch of warmth. Chef Pajo is known for using many cutting edge cooking techniques – including molecular gastronomy (using science to create unique food combinations such as chili balls) and sous vide (extended cooking for long periods of time at a precise but low heat). Read his profile in the Sac Bee here.

Because we had read all the hype about the new cooking techniques, my wife and I decided to give the new restaurant a try last weekend.

When we ordered, we wanted to select as many foods as possible that used Chef Pajo’s innovative cooking techniques and decided to save many of the other, more traditional dishes, for a subsequent visit.

We ended up ordering four appetizers, no entrees and dessert. The criteria we used to judge the food was whether the exotic cooking techniques created new flavors or textures, or merely replicated tastes that could be done using more traditional methods.

First, we ordered the shrimp ceviche ($12) at the suggestion of the waitress. It comes with chopped jumbo shrimp, lime juice and a mango “yolk.” 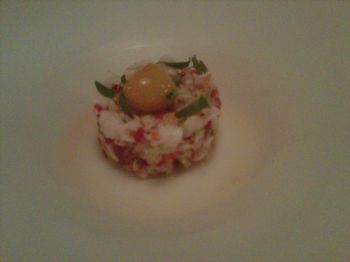 The yolk really looked like an egg yolk, but was really mango juice infused with a solidifier. After we dug in, we popped the yolk and the mango juice drizzled into the rest of the ceviche.  The dish was original in its presentation, but we didn’t feel like its taste was any better than could be achieved by adding mango juice to a standard ceviche. The dish was good, but not great. Luckily for us, the rest of the dishes really wowed us. 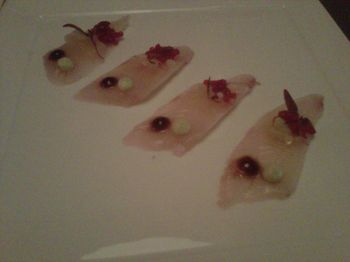 We were instructed to eat it like a taco, where the hamachi would be the tortilla. This dish was both unique and amazing.  We loved this dish. The chili balls gave the “taco” a nice bite. The exceptional thing about the dish was that the chili balls weren’t spicy until you bit into them and broke into where the chili oil was. The flavors of the dish were subtle, and the cutting edge cooking techniques created flavors and textures I had never experienced before. 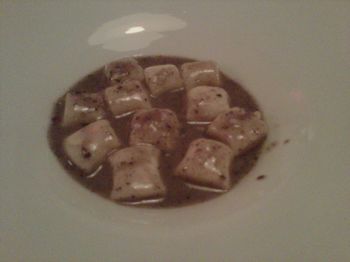 This was another amazing dish. While I didn’t detect any non-traditional cooking techniques, the gnocchi was fluffy and soft – unlike the gnocchi at many other mainstream Italian restaurants. It was the best gnocchi I’ve ever had. We literally spooned the remaining black truffle butter out of the bowl and directly into our mouths after we finished the gnocchi. Great dish. 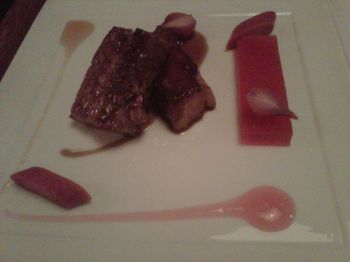 Chef Pajo came out to explain this dish. I didn’t quite catch every detail, but it’s something along the lines of three separate 12 hour steps to make this dish, totaling 36 hours. The dish itself had super tender pork with a great crust from being seared just right. The pickled baby onions, rhubarb and rhubarb jelly were really well prepared. Just an excellent dish all around and probably our favorite dish of the night.

For dessert, we narrowed down our selection to house made pop tarts ($6) or their brioche donut holes ($6). We asked the waitress, and she recommended that we go with the pop tarts, one filled with strawberry jam and rhubarb jam. They were baked smothered with a sugar frosting. 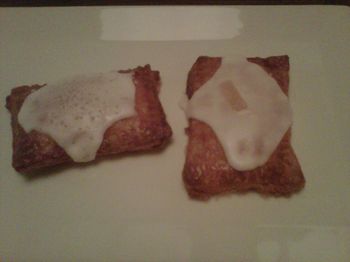 Since the waitress knew that we were down to two desserts, the kitchen decided to comp us the brioche donut holes, which were served with an apple caramel sauce. 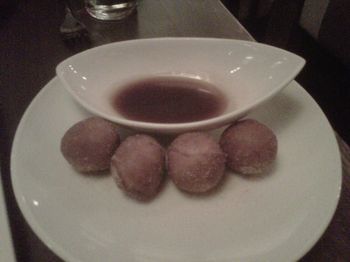 For those who follow chef comings and goings, as part of its overhaul, Lounge ON 20 hired Elaine Baker as its pastry chef. She had just recently left her spot as the pastry chef for The Grange. Some have called her one of the best pastry chefs in Sacramento. After tasting two of her desserts, I whole heartedly agree. They were both heavenly.

I would be remiss if I didn’t mention the drinks. Lounge ON 20 has a great crew of bartenders that make artisan drinks. We ordered a carafe the Femme Fatale (gin, blackberry, ginger and sparkling wine for $19), which is about four drinks. No cheaper way to get upscale cocktails.

Prior to the revamp, I had gone to happy hour at Lounge ON 20, but had no particular reason to stay for dinner. With the new menu, some of the best food in Sacramento is served here. While I liked everything we tried, the pork belly and hamachi stand out as dishes that you can’t miss. I also wholeheartedly recommend having a dessert while you’re there. You won’t regret it.

Lounge ON 20 can be found at the corner of K and 20th in the MARRS building.