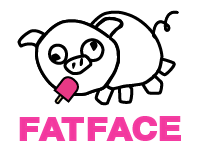 Fat Face's move from Davis to Sacramento has been widely anticipated for months. Known for their scrumptious sandwiches and creative popsicle flavors.

I first learned about it from a Sac Mag blog item, calling it one of the reasons to drive across the causeway for lunch. Sac News & Review's restaurant reviewer Greg Lucas has called Fat Face "wildly inventive artistry" and "There's no way to leave the premises without exploring at least one corner of this new plateau for popsicles. Even in a blizzard."

However, I work in downtown Sacramento, and it's not easy to get somewhere 20 minutes away on a workday.

They opened yesterday at their new location across the street from Safeway on 19th and next to Massage Envy, and I was able to stop by on the way home from work for a quick drink and bite.

First, the setup is a little odd. The rectangular building has three purposes. As you walk in, you enter Bows and Arrows, a vintage clothing store. The next third of the space is taken up by an art gallery. The final third is a bar that serves food. Beyond that is an outdoor patio that bumps up to the train tracks. The outdoor patio can be described as shabby chic. It’s decorated with random doors and windows – a little reminiscent of the decorations above the bar in Ella, but more like Ella’s indie cousin.

Bows and Arrows runs the vintage clothing store, the art gallery and the bar. The food at the bar is provided by Fat Face, and it’s what brought me in.

Given that it was their first day after moving into their new space, there was only one other couple there when we got there. The staff had a super friendly vibe, but you could also tell that they were still trying to figure things out. Not unexpected on their fist day. 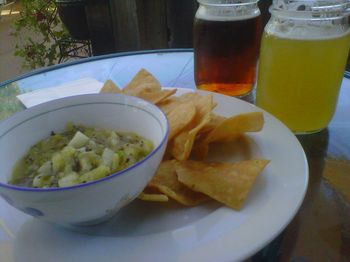 They’re also concentrating on their lunch business at first, so only appetizers were available after work. We ordered the chips and kiwi and jicama salsa ($4). On the first warm day of the year, it was refreshing to have a sweet and tangy salsa as opposed to some of the spicier salsas at Mexican restaurants. The chips were thick and crisp, but not oily and soggy. It was an inventive take on what could be a boring dish.

We paired the snack with an Allagash White Ale ($5) and a North Coast Red Seal Ale ($4). (They didn’t have happy hour yet, but it was a concept they were considering.) The microbrews were both great beers for the weather. They have a variety of specialty brews on tap, ranging in price from $3.50 to $5. They also have Miller High Life and Hamm’s for $2 each in the can. They also serve wine by the glass ranging from $6 to $9.

For dessert, we chose a traditional popsicle flavor, strawberry lemonade, and a the least traditional flavor, Thai iced tea potato. They were $3 each.

Both were well executed and tasted like their description, except for the potato part of the second popsicle. I couldn’t figure out what the potato was in there, but I like Thai iced tea, and that’s what it tasted like.

Overall, it was a great experience given that it was their first day. I’ll definitely come back and give their sandwiches a try very soon. The other couple who arrived before we did were able to snag a couple, and they couldn’t stop raving about them. While they’re a little on the pricey side at $10 or so, if the care they put into their chips and salsa is any indication of how they make their sandwiches, they’ll be fantastic.