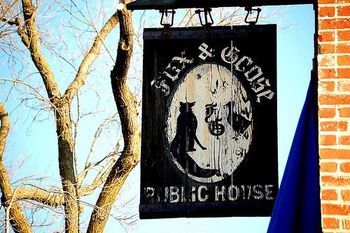 Fox & Goose, the iconic English pub at 10th & R, is set to expand its patio dining and add condos, reports Bob Shallit in the Sac Bee.

The most immediate change, starting in weeks, will be the dock extension, creating a "contemporary but industrial" patio for about 40 diners.

The private dining room and events space – along with new restrooms, break rooms and offices – will be added next year.

The condos? Those could be "optimistically five to seven years" away, Dalton says. But she's already begun talks with Sacramento's D&S Development Co. – the builder of lofts at 14th and R streets – about a joint venture on the project.

Is New Helvetia Brewing on tap for Broadway? - David Gull, who had been a real estate developer, is taking a shot at opening New Helvetia Brewing Co. on Broadway in Sacramento’s Land Park neighborhood. Gull submitted permits to the city this month, but he’s still got a way to go. Not only does he need to get permits from the city, but he also needs permits from Alcoholic Beverage Control. “My goal is to be in production in January and open in February,” he said. Mark Anderson in Sac Biz Journal.

Really, Really Hungry? Tuck Into Chops' Meatloaf - Meatloaf portions in restaurants tend to be generous - perhaps chefs know instinctively that they're plating up a slab of comfort for a needy, hungry patron, and they want to make sure there's plenty of it. But I was astounded by the sheer magnitude of Chops' dense, fragrant, rosemary-flecked meatloaf - the size of a small novel, the meatloaf was heavy enough to serve as a (very tasty) doorstop. Kira O'Donnell in Sac Mag.