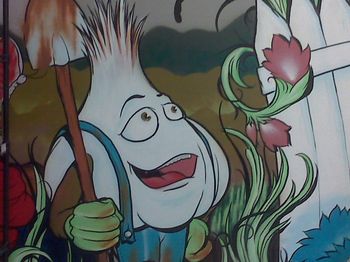 I love garlic. When a recipe calls for one clove, I always add two. Because of that, I've had high hopes for Garlic Shack. But between bad Yelp reviews and terrible word of mouth, I haven't gone to try it out yet. Now, Sac Bee restaurant critic Blair Anthony Robertson gives his first impression:

[M]y impression is the menu needs some nips and tucks, along with some refinement – in the kitchen, the staffing...

They are a new restaurant, so they should be given the time to grow and improve. I'll wait to eat there until they've done that.

I'm digging what I see so far at Fat Face, which is the brainchild of Jaymes Luu, who could be on the brink of stardom. Her ice pop treats – $3 popsicles – have the potential to inspire, with such flavors as kaffir lime and avocado.

Ravenous Cafe Under New Ownership - I dined at Ravenous Cafe in the Pocket area for the first time last night and found out that chef/owner Mark Helms recently sold the restaurant—name and all. Don’t panic, all you foodies—especially Greehaven/Pocket residents who love having an upscale restaurant in the neighborhood. New owner Wade Sawaya isn’t planning any drastic changes to menu’s food or wine list, and Helms himself has been overseeing the restaurant’s change of hands. (When we dined last night, Sawaya was on Day 3.) Elena M. Macaluso in Sac Mag.

Drink up? - The recently vacated Brew It Up space in downtown Sacramento may not be dark for long. At least four groups have inquired about taking over the city-owned retail spot at 14th and H streets in the week since the "personal" brewery and restaurant shut down, says city official Howard Chan. Bob Shallit in the Sac Bee.

New microbrewery coming to Broadway - Sacramento’s brewing history will be spotlighted in a new microbrewery set to open in a historic building on Broadway early next year. Dave Gull, 37, said he saw the building at 1730 Broadway and thought it would be the perfect place for his New Helvetia Brewing Company idea with its proximity to Land Park in an area that’s a diverse mix of ethnic restaurants. Brandon Darnell in Sac Press.

Counter Culture: Tiny restaurant opens along with Sacramento's Greyhound terminal - Inside the new Richards Boulevard terminal – clean, green, well-lit and pretty much inaccessible to foot traffic – we checked out the tiny restaurant, called Restaurant. It's one of only four fully staffed food- service stands at major terminals in California. In fairness, the restaurant is brand-new and, as with any eating establishment, it takes a while to streamline the operation. Yet the line of customers didn't let up during our 90-minute visit. Allen Pierleoni in the Sac Bee.

Scott Fenner: A chef in the making, not making enough to get by - Scott Fenner -- talented and determined as he is -- recently got a heaping dose when he gave notice at Ella Dining Room & Bar. He went back to his former world of working construction. It wasn't because he couldn't cook. He just couldn't make ends meet. Blair Anthony Robertson in the Sac Bee.