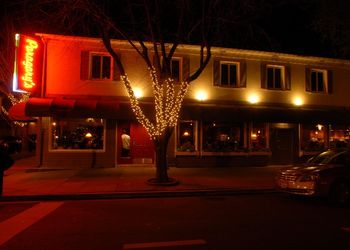 Turns out, restaurants are like Hollywood celebs. When they get long in the tooth, it's time to get a makeover or risk irrelevance.

After the venerable Biba underwent a rennovation earlier this year, Paragray's flagship restaurant at 28th & N will be remodeled -- 26 years after it first opened, reports Bob Shallit in the Sac Bee.

[Paragary's] will have a back wall removed and replaced with glass, opening the dining area to a courtyard with waterfalls, a fireplace and olive trees.

But that's just part of the remodel that will most likely begin next March and cause a two-month closure of what is now Paragary's Bar & Oven.

"Pretty much every square inch of the restaurant will be touched – floors, walls and ceilings," Randy says.

Read the entire story in the Sac Bee. Photo via paragarys.com.

Restaurant Thir13en: Metamorphosis - The folk from Tuli Bistro in Midtown know what they’re about. They have a knack for exploiting small interior space and spacious patios. But at their core it’s about inspired food—created by Adam Pechal—served with jovial professionalism. This mode has now been imported to Thir13en, formerly Chanterelle, in the cellar of the Sterling Hotel at 13th and H streets. Greg Lucas in Sac News & Review.

Dad's Sandwiches owners buy J's Cafe - The owners of Dad’s Sandwiches recently bought a longtime downtown eatery and plan to add some of their signature sandwiches and rename it Dad’s on J by the beginning of next year. Brandon Darnell in Sac Press.

Barwest Grand Opening - Gosh, if I didn’t like this couple so much I’d be disgusted with myself by how fawning this blog sounds. But I do like them, and I wish them well. Consider checking out Barwest this weekend—it’s the grand opening—and support a couple of local guys making a go of it in the Midtown restaurant scene. Elena M. Macaluso in Sac Mag.

Free Fries on Friday - The Counter promised and The Counter is delivering. Apparently, the popular build-your-own-burger-chain promised free fries after Congress finalized the debt deal. This Friday, Aug. 19, The Counter is making good on that promise with a complimentary single order of regular or sweet potato fries. Elena M. Macaluso in Sac Mag.