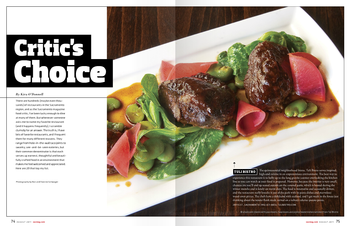 Her piece reminded me that while I think I eat out a lot, there are still a lot of good restaurants out there that I need to add to my to eat list.

Find out what her picks were in Sac Mag.

Sac Mag also has their Best of Sacramento Dining Awards, as selected by their readers. Click here for that list.

The Golden Bear expands its territory - The space that formerly housed Hangar 17 in Midtown has been taken over by owners of The Golden Bear, who plan to bring a “grown-up” version of their neighborhood bar and restaurant to the area. Brandon Darnell in Sac Press.

Irish pub coming to El Dorado Hills - In all this latest news of restaurants shutting down, here's a place that's bucking the trend and set to open soon. Kinnee O'Reilly's Irish Pub & Restaurant is scheduled to open in late-September at the Montano Shopping Center in El Dorado Hills (1000 White Rock Rd., El Dorado Hills). Chris Macias in the Sac Bee.

Dewey Cheaters Vodka giving it a shot locally - When business slowed down several years ago for real estate developer Jon Sweet, his thoughts turned to vodka. Not to drinking it, mind you. Rather, he started to think about manufacturing an American-made high-end vodka. The result is Dewey Cheaters Ultra Premium Vodka, based in El Dorado Hills. Mark Anderson in the Sac Biz Journal.