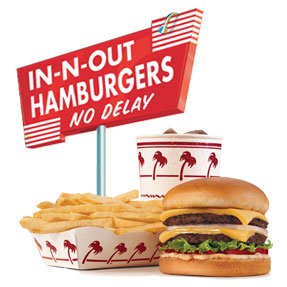 In Bob Shallit's Thursday column in the Sac Bee, he reports that the word on the street is that In-N-Out are looking at a location on Alhambra.

[Carl Van Fleet, the company's VP for planning and development] says the company has no current plans for additional sites in the region.

But we keep hearing rumors that In-N-Out execs have their eyes on at least one other high-profile local site: near Alhambra Boulevard.

We know that In-N-Out builds their own buildings, so they'd probably prefer an empty lot. They'd also probably want somewhere with a lot of traffic. My best is guess is that it has to be that spot at Alhambra & Folsom Blvd.

Anybody have a better guess?

Formoli’s Bistro: A formidable feast - Formoli’s Bistro is formidable. Four stars from the first visit. First and foremost, Formoli’s floats the boat of Mrs. Lucas...What wins her praise here is a passel of appealing possibilities for vegetarians, both as meal openers and closers. Beginning at the beginning: The vegetable carpaccio is crisp and refreshing with slender, overlapped paving stones of cucumbers and orange and purple beets arrayed before a mound of mixed greens that are dappled with a thin bell pepper puree. Greg Lucas in Sac News & Review.

Chicago Fire at the Palladio in Folsom - The new, cavernous Chicago Fire in Folsom's Palladio mall opened Monday, meaning now there's one more location where my kid can rave about the salad. The salad? That's right, the salad. My 12-year-old loves Chicago Fire's house salad. Krista Minard in Sac Mag.

Mulvaney's gets nod from OpenTable - The accolades keep rolling in for Mulvaney’s B&L restaurant in midtown Sacramento. The restaurant at 1215 19th St. was the only local restaurant to be picked by OpenTable reviews as being among the top in the country making American food. Mark Anderson in Sac Biz Journal.

Ruhstaller beer makes Sacramento comeback - A Sacramento entrepreneur is looking to bridge past and present with the resurrection of one of Sacramento’s most-recognized names in beer: Ruhstaller. J-E Paino, a native San Franciscan who grew up in Houston before moving to Davis for college, settled on the idea of marketing new, California-grown and brewed beer under the classic Ruhstaller name about two years ago, and he officially launched the product Tuesday night at Mulvaney’s B&L, 1215 19th St. Brandon Darnell in Sac Press.