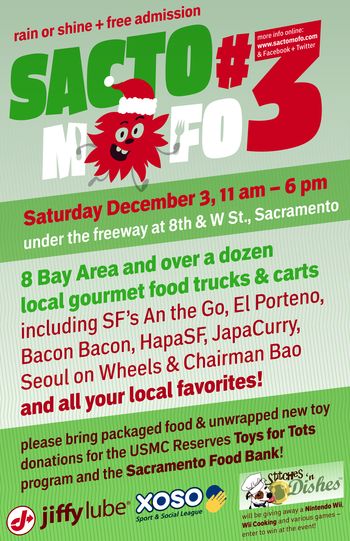 SactoMoFo 3, to be held this Saturday, Dec. 3 from 11 to 6 p.m. at the parking lot at 8th & W streets, will be the site of Heavenly Dogs, a new hot dog-themed truck, reports Allen Pierleoni in the Sac Bee.

Among the 20 expected vendors will be Nicki Smith of Elk Grove, piloting the Heavenly Dog truck built by her husband, Chris Smith. HD is a family-involved dog-centric restaurant that opened in 2008 and features a lot of items from family recipes, such as the tri-tip chili. It's one of our go-to spots when the dog mood is on us. The house-made relishes are great...

Look for a variety of Heavenly Dog's red hots, including a bacon-wrapped version, along with chili cheese fries, garlic fries, sweet potato fries and onion rings.

The mobile food fest was originally scheduled to be held at Power Balance Pavillion, but was moved recently to the 8th & W streets lot. The move allowed the organizers to make the event free.

City Hall Garage to get new eatery: Big Joe's BBQ - Flavorful barbecue and hearty sandwiches will be at the top of the menu at Big Joe’s BBQ when it opens its doors in January at the former Fog Mountain Café space at the City Hall Garage. Melissa Corker in Sac Press.

The new Zinfandel is a lot like the old Zinfandel, with good reason - We were surprised and disappointed last summer when we stopped by the Zinfandel Grille in Gold River and found the doors locked and the dining room dark. Then, one night last week, we found it open and operating under a new name - Zinfandel California Cuisine. What was going on? Turns out the Grille changed ownership in April and closed for a slight renovation, then reopened under its new name in September. Allen Pierleoni in the Sac Bee.

Check It Out: Fabian's Italian Bistro in Fair Oaks - I recently had a knockout chicken picatta at Fabian’s Italian Bistro, a charming family-owned restaurant in Fair Oaks. Opened in January of 2010, the restaurant offers a great variety of small plates and pizzas in addition to its handmade pasta dishes and Italian specialties. In Sac Mag.

All about the beer - The founders of what's being called Sacramento's only true microbrewery are racing to get their business open by Dec. 31. "Otherwise," jokes Ryan Graham, a partner in the venture, "we'll have to change all our stuff" – the company-branded T-shirts and glasses that say, "Track 7, established in 2011." Bob Shallit in the Sac Bee.

Nothing Bundt Cakes opening Thursday in Roseville - Sacramento's got one heck of a sweet tooth. Think about all the cupcake shops and boutique bakeries that have opened around the area in the past couple years, with mini pies being the latest dessert du jour. Now, comes word that Nothing Bundt Cakes will open on Thursday in Roseville. This bakery franchise has headquarters in Las Vegas with locations all around California, Texas, Tennessee and other states. Chris Macias in the Sac Bee.