Eat It!: Sunshine Roll at Kru

Over the weekend, my wife and I headed over to Kru for Sunday dinner. We had purchased a Groupon in the spring, and we wanted to make sure we used it before it expired later this month.

We are big fans of all of Billy Ngo’s restaurants – from hosting our rehearsal dinner at his now defunct Red Lotus to a visit just last week to his newest venture, Pork Belly Grub Shack, we simply love the food at his restaurants. And while we had both individually been to Kru, this was our first trip there together.

We decided to sit at the sushi bar and this was one of the best decisions we made that night. If there's space, sit on the left side of the bar where your view of the chefs is not obscured by the refrigerator of fresh fish. It gave us a great view of chef Billy Ngo and two other chefs cook and assemble entrees and rolls. It was like an episode of Iron Chef, but in person.

After perused the menu, we decided to trust our waitress and let her do the ordering for us. One of the things she suggested was the Sunshine Roll, a new addition to the menu. 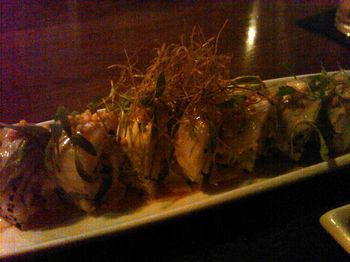 The flavors were complex and layered, the sauce was spicy but delicious. Billy Ngo had combined traditional Asian flavors in a unique way in one delicious roll. I can’t recommend this roll highly enough.

While we were there, we also tried their cinnamon apple egg roll served with a green tea sauce. It was also amazing. We loved Billy’s desserts at Red Lotus, and loved this dessert. We also tried his molten chocolate cake. I thought it was good, but nothing imaginative or spectacular.

I also want to recommend two other dishes we had when we were there – both from the specials board at the sushi bar. The first is his tempura pork belly. It was a great dish with large pieces of pork belly served with dehydrated chili oil and green tea sea salt. It had a very subtle taste on a bed of scrumptious mushrooms. A great dish. 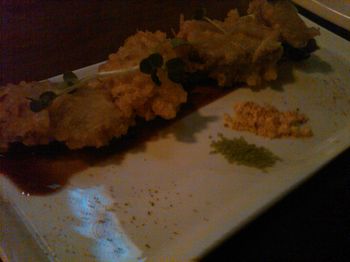 The other dish we recommend is the bone marrow served with a wasabi mustard, cole slaw and grilled bread. We’ve had some great bone marrow at restaurants like Elk Grove’s Boulevard Bistro and Billy’s dish was right at the very top of the list. 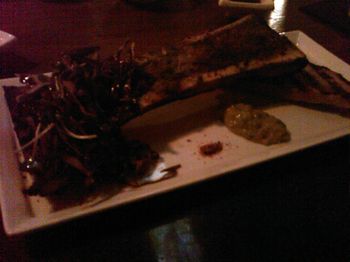 If you like sushi and creative ways to combine Asian flavors, I can’t recommend Kru enough. It’s a great respite from places like Mikuni which are good, but at times seem like they’re aimed at a mass audience instead of food lovers.

I also want to add that Billy was a great host. I had never met him before, but when we asked, he took the time to explain what he was cooking and seemed to genuinely enjoy his work to serve the people of Sacramento great dishes like the Sunshine Roll.