Pork Belly Grub Shack, a collaboration between Kru owner Billy Ngo and Formoli Bistro’s Aimal Formoli, had its soft opening last night, and Cowtown Eats was there to let you know whether it’s worth the drive to Natomas or not.

The concept of the restaurant is pretty simple. Pork belly is awesome, so they’re going to try to find as many creative and tasty ways as possible to put it into their food.

Given that yesterday was their soft opening, it would be unfair to give their restaurant a full review. This post will focus mostly on their vision and flavors, and not their service or execution.

The restaurant, tucked away in a strip mall on Truxel Ave. between Arena and Del Paso, is in a smaller space – akin to the space you’d see a lot of Subways or Quiznos taking up. Its tables, mostly two and four tops, were covered with red and white checkered table cloths, invoking a picnic feel. When we got there at just 30 minutes shy of its 6 p.m. closing time, and the place was bustling but not packed. But enough of the ambiance. Let’s talk about the food.

I went with my wife, and we asked the cashier (it’s the type of restaurant where you stand in line to order your food and they’ll bring it to your table) which menu items had pork belly in them. He rattled off about half the menu - the street tacos, Pork Belly Fries, Belly Mac & Cheese, Bahn Mi and Notorious PIG burger, PLT (Pork Belly, Lettuce & Tomato) and Pork Belly House Salad. They were out of the Belly Mac, so we ordered the street tacos, fries and bahn mi. 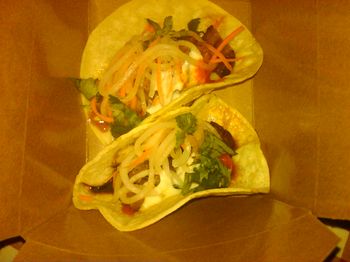 The street tacos were our favorite part of the meal. There was a good chunk of pork belly in the taco and it was spicy enough so you knew it was a taco and not a wrap. While the tortillas had been warmed on the grill, but had cooled by the time we received them.  Because they’re new, I won’t hold that against them. These $2 tacos were a hit. 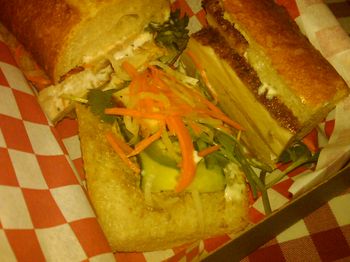 The bahn mi was also very good. As you can see in the picture, they again had a very generous serving of pork belly in the sandwich. Many traditional bahn mi sandwiches (at least the ones I’ve had) contain sliced jalapenos to add a little bite to the middle of the sandwich. These didn’t, possibly to make them palatable to a wider audience. As with the tortillas on the tacos, the bread felt like it had been sitting in a refrigerator. Again, I’ll chalk this up as something they can and will fix as they get started. I enjoyed this sandwich (approximately $7) but would try other things on the menu first before revisiting this good, but not great dish. 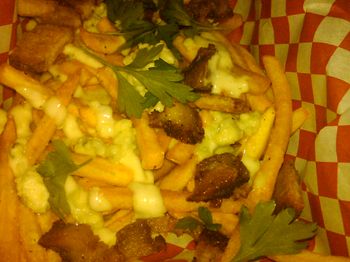 The third item we tried was their Pork Belly Fries. Basically, this was a very generous portion of shoestring fries topped with bleu cheese and pork belly bits – analogous to large bacon bits on a salad. The fries were well cooked and the pork belly was ample. This dish was good, but on my next visit, I think I’ll try the Belly Mac & Cheese instead. I think mac & cheese would provide a better showcase for the star ingredient than these $5 fries.

As you may or may not be able to see in the photos, all the dishes were all served in the eat-in-the-car containers that you’d get at In-N-Out.

Overall, I really like the concept of the restaurant and the flavors that they’re combining. They have a little work to do on execution, but nobody gets anything 100 percent right the first time they do it. I have faith that they’ll fix these little issues and their service and execution will match their vision and culinary talents. I’ll definitely be back and I’m hoping to give the mac and cheese and Notorious PIG burger a try.

Pork Belly Grub Shack is located at 4261 Truxel Rd in Sacramento. Yesterday, they were open from 12 noon to 6 p.m., but it’s not yet clear if those are their regular hours or their soft opening hours. Check their Facebook Page for more information.