As you first walk toward The Porch, it reminds you a lot of Celestin’s, the Cajun restaurant that occupied the spot for nearly three decades until it closed in September. The building’s façade remains the same, a temporary banner adorns where its signage will (presumably) eventually go above the awning, and walking in after the sunset, the exterior color wasn’t noticeably different.

But once you turn from walking on the sidewalk and head into the restaurant, it’s immediately clear that things have changed – and for the better. Gone is the dark ambiance that once graced the interior of the space. Replacing it is a bright and modern restaurant, reminiscent of Ten 22. The new owners have removed the wall separating the bar area and the dining room, resulting in a much more open venue with much better lighting. The dark wood tables (if memory serves) of Celestin’s have been replaced by high top bar tables with what looks like laminated cutting board bar table tops.

My wife and I stopped by on Monday for happy hour and if we found what we liked, maybe an early dinner. 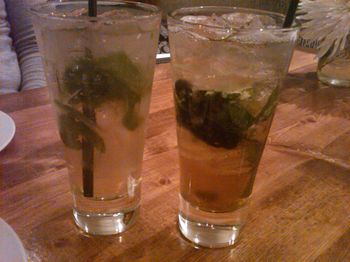 We started by ordering drinks. My wife ordered The Charleston ($5 during happy hour), made with Titos vodka, Madeira wine, sweet tea, lemonade and a mint simple syrup (left), while I had the Blue Kentucky ($7.50 during happy hour), made with muddled blueberries, basil and 100% organic blue agave nectar, Bulleit bourbon finished with soda water (right). I’ll admit that I don’t have a well developed cocktail palate (yet), but I thought the Charleston was pleasant and crisp, a little sweet and it definitely went down easily. It’d be a great drink for a warm Sacramento evening. The Blue Kentucky was a much stiffer drink, but well crafted and balanced. If they continue to emphasize their great cocktails, reportedly developed during a trip to the South, The Porch will join the likes of Shady Lady, The Grange and Ella as the places to go to grab an artisan cocktail on The Grid. 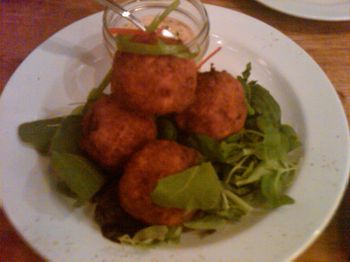 We also ordered a couple of happy hour appetizers. We started with the pimento cheese fritters ($5). They were deep fried and served with house romoulade. It had a great crunch and warm throughout. Even without the sauce, the fried cheese had a little spiciness to it. We also ordered the picked shrimp ($7 for 4 shrimp). It was served with mixed greens, creamy lemon dill dressing, cucumber, remolade. The nicely-plump shrimp were very mildly pickled, and tasted relatively fresh (for being pickled). The bed of greens were very crisp and was complimented well by the dressing. Both of the appetizers were very good, and I’d definitely get them again on a return visit. 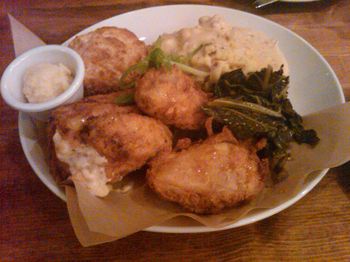 We were still hungry, so we decided to order an entrée to share. After perusing the menu, we decided to get the buttermilk fried chicken ($19). It came with three pieces of chicken – airline chicken breast, leg & thigh, served with Yukon gold mashed potatoes, sausage gravy, collard greens, buttermilk biscuit and green Tabasco honey butter. The waitress informed us when we ordered that the chicken was brined, and took 3 days to prepare.

I don’t know what they do during those 72 hours, but when you bite into it, it’s clear that it’s worth every minute of that prep time. The crust was thick and crunchy. The first bite revealed that in there was a hint of sweetness – something that we attributed to honey. Even the chicken breast was nice and moist.

The collard greens were slightly tart, like those you’d find at Broadway Soul Food or Sandra Dees. The mashed potatoes and sausage gravy were perfect – lumpy, with an irregular consistency, but so tasty. The portions were huge. We couldn’t finish the fried chicken entrée even though we were sharing.

If there was one minor quibble, it was the buttermilk biscuit. To its credit, the biscuit was crunchy on the outside and soft on the inside. But it was a little cold. Maybe I’ve watch too many Food Network shows where the baked goods are always steaming when served, but that’s what I expect. Also, I have a huge pet peeve about restaurants serving cold butter. The butter tasted great, but it was also cold. The combination of the room temperature biscuit and cold butter made it a challenge to enjoy.

With that said, we really enjoyed our experience. We visited the restaurant when it was open less than a week, but they seemed to have their act together. No doubt, the owners learned a lot from their experience running Capitol Garage.

While I was sad that Celestin’s (along with its great gumbo and affordable happy hour sangria and Red Stripe) are gone, The Porch is off to a great start. There is a clear vision for the place and provides an upscale alternative to other restaurants that serve Southern cuisine. I look forward to eating there again.

The Porch is located at 18th & K streets.