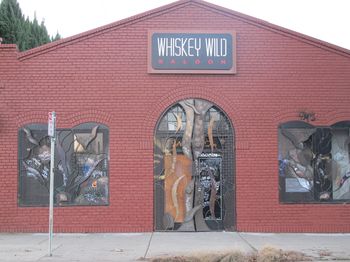 Whiskey Wild on Q street next to the train tracks, closed back in 2009, bu it looks like somebody's finally willing to fill the void, reports Bob Shallit in the Sac Bee.

Lots of food and drink will drive you to the Pour House.

That's the hope, at least, for the owners of a new restaurant and bar by that name, opening in 60 days at the former Whiskey Wild Saloon site at 19th and Q streets.

In this economy, that punny name was the "perfect fit," says Trevor Shults, one of five partners behind the new venture.

Shults, also a partner in midtown's sports- and beach-themed Barwest, says this will be an "Old World restaurant and bar with a new age twist."

New Orleans fare coming to Broadway - Original PoBoys will open Friday at Broadway and Alhambra Boulevard, bringing what owner Eric Crawford said will be an “oasis for anyone from New Orleans.” Brandon Darnell in Sac Press.

Arigato Sushi: Brave it for the crave - Based on the restaurant’s filled-to-the-gills conditions, if the servers and chefs at Arigato Sushi said thanks to every patron, they’d reduce their voices to a croak in a very short time. Even on an off night like Monday, business here is brisk. There are four sheriff’s deputies at a table—always a positive sign. Like they’d be dining someplace sketchy? A solid group of 12 diners boisterously celebrates a birthday with many a “Kampai!” as cup after cup of sake goes down the hatch. Greg Lucas in Sac News & Review.

Here’s a tip: Eat at El Forastero - The RonTopofIt family hit the drive-through at El Forastero Mexican Restaurant on Fair Oaks Blvd. at Walnut Ave. this afternoon for a quick bite. I had been meaning to give it a go since they took over the space previously occupied by Taco Ball back in October (a large chain being replaced by a smaller chain, go figure). Shocker, Yelp is all over the place with reviews. I went in with little research, however, and had never been to the other locations in Sacrament and Stockton (it’s been a few months, guys, time to update the website) so I was ready. On The Sac Rag.

Know Bacon, Know God, No Bacon… - Is there such a thing as too much bacon? I thought it a valid question after this weekend’s inaugural Bacon Fest. And while I didn’t have a chance to try every bacon offering throughout town, I did sample a few memorable dishes. On The Sac Rag.