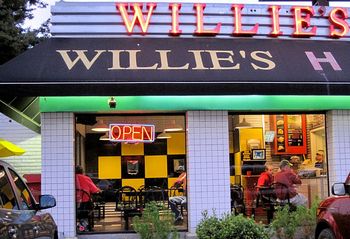 In Sacramento, there are two distinct groups of food trucks. The first are entrepreneurs who are launching a food truck in the hopes of one day opening a restaurant. Notables among this group are Mini Burger Truck, Drewski's Hot Rod Kitchen, Wicked 'Wich, Coast to Coast Sandwiches, etc.

The second group consists of existing restaurants who have decided to expand into the mobile food space. Examples of this are Mama Kim's To Go and Chando's Tacos.

Willie's has offered late night eats to drunkards at 16th & Broadway for more than 20 years. Then, he added a second Willie's location at Arden & Fair Oaks. A couple years ago, owner Bill Taylor opened Iron Steaks. Now, he's the owner of a food truck.

(As an aside, I was at Iron Steaks late last year grabbing a beer and watching football and met Bill. He seemed like a great guy who was willing to talk to and teach your humble blogger a couple things about the business of restaurants.)

If you're looking to check them out, Willie's Wagon will join Chando's Tacos, Cajun Wagon Catering, Coast to Coast Sandwiches, It's Corn Cake and Volkswafle at the Cordova High Stadium from 4 to 9 p.m. on Saturday.

Mikuni celebrates 25 years - Mikuni Japanese Restaurant and Sushi Bar will celebrate a quarter century in business May 15, and co-owner Taro Arai said that after the touch-and-go nature of the first five years, the business has come a long way. Brandon Darnell in Sac Press.

Wine, Straight From the Tap - Practicality meets instant gratification at Bumgarner Winery in Camino, which is serving up its ready-to-drink Silver Fork line directly from the tap and bottling it on the spot for visitors to the tasting room. Catherine Warmerdam in Sac Mag.

Servers Say Groupon Leads to Smaller Tips - Servers all over the country are complaining about the lack of tips they receive from their customers, particularly from users of Groupon. Adam Krolfifer and Ian McDonald on Fox40. (Video)