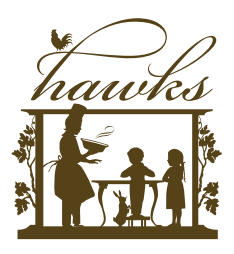 The flavors and the combinations on the plate are broad, focused, often beautiful and, in the case of one dessert involving what I thought would be a German chocolate cake, show touches of edgy, elegant brilliance....

With its fine staff, meticulous training and attention to detail from kitchen to dining room, Hawks is doing enough to be considered the best restaurant we've got.

I've never had the chance to try Hawks. Mostly, it's the distance from Downtown that's kept me away, but I do have their Sunday fried chicken dinners on my to do list. I hope they rumors that the owners are looking at a space at Stockton & Alhambra are true.

Eat to Feed the Hungry debuts this week - Starting Feb. 20 and running through Sunday, community members can turn their dinners out on the town into a battle against hunger in the Sacramento region. Sara Islas in Sac Press.

Sacramento Food Truck Ordinance Update - Ms. Munchie just got off the phone with the City and is allowed to share some (though just a little) news! First, put March 20th on your calendar as the date for the City's Law & Legislation Committee to take a first look at the proposed ordinance changes. Things can always change, though, as we learned last November when we got postponed. For now, that's the latest agendized date. Catherine Enfield on Munchie Musings.

Flooring as well as oysters will be on this bistro's menu - How about some oak flooring with your latte and croissant? That's a not far-fetched future query at Les Baux, the French bakery, coffee shop and bistro that Sacramento's Trong Nguyen is opening in a month or two at the former Cassidy's Family Restaurant site at 51st Street and Folsom Boulevard. Trong, a big fan of unusual woods and a supporter of sustainable building practices, is filling his new place with reclaimed lumber and allowing visitors to place orders for the products they like. Bob Shallit in the Sac Bee.

Slocum comeback? - Speaking of restaurants, the owners of the historic Slocum House in Fair Oaks haven't yet found a buyer for the property. Not at the original asking price of $1.3 million. Not at the reduced price of $945,000. So now, says John Bansemer, whose parents own it, the place once known for elegant meals served in a courtyard full of live chickens, is being offered up for lease. Bansemer says the building has been fixed up and its "best use" is still as a restaurant. One prospective user is "very excited" about a deal, he reports. Bob Shallit in the Sac Bee. (Second item.)