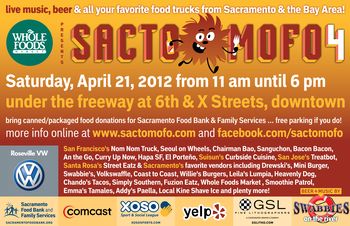 SactoMoFo 4 (aka the Sacramento Mobile Food Festival) announced that the Nom Nom Truck (of the Great Food Truck Race fame) and San Francisco's Chairman Bao, Bacon Bacon, Seoul on Wheels and Curry Up Now will be joining more than a dozen other trucks at the upcoming event on April 21. Sac Bee's Chris Macias has the details:

See the entire story in the Sac Bee.

Billy Zoellin prepping to open his own restaurant - Billy Zoellin's creative takes on simple cuisine while he was the chef at the Golden Bear attracted national attention and won him many new fans on the local food scene. After a topsy-turvy year, Zoellin is getting ready to open his own place - a breakfast, lunch and espresso spot on 21st Street he's calling Bacon & Butter. Blair Anthony Robertson in the Sac Bee.

Samuel Horne’s Tavern: Respect the drink - Samuel Horne’s Tavern is dark, loud and crowded—in a good way—even on a weeknight. No doubt, management is grateful, but the patrons of this Old Folsom bar appear equally enthused. Here, one is instructed to “Respect Sam” and “Respect beer.” There is a 100-mile happy-hour list featuring brewskies brewed within that radius. Think globally. Quaff locally. Greg Lucas in Sac News & Review.

New lease, new locale: Bistro La Petite France moves to Folsom - Many fans of the cooking and warm, friendly environment at Bistro La Petite France in Granite Bay have been upset to learn that their beloved restaurant has closed, albeit not for good. But because of a issues regarding the lease, the husband-and-wife team of Christophe and Claudine Erhart were compelled to close the bistro and find a new location. By the first week in April or thereabouts - after plenty of heavy lifting, scrubbing and painting - the couple expect to reopen in Historic Old Folsom. Blair Anthony Robertson in the Sac Bee.

El Palmar no place for snobs - At El Palmar, folks are hungry and they have certain needs. They want friendly, efficient service and they don't want to hear smirks when they mispronounce "huevos rancheros." They want substantial portions and lively flavors. Then they want to be on their way...At the risk of sounding like Marilyn Hagerty, the white-haired, Olive-Garden-loving, 85-year-old newspaper-scribe-turned-viral-Internet-sensation from North Dakota, there is nothing wrong with Mexican food cooked with a suburban American twist. Blair Anthony Robertson in the Sac Bee.