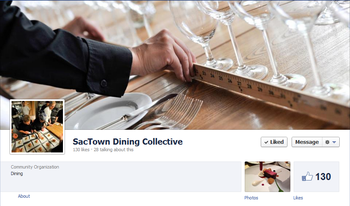 One of the major catalysts for the formation of the group was a survey published by LivingSocial that named Sacramento as the second-worst place in the nation for dining.

“In looking at it from my corporate background, when we see a threat or opportunity, it’s not uncommon for a group to get together and leverage one another’s strengths,” [Amber] Turner, [a marketing specialist with a love for Sacramento’s restaurant scene] said.

Fresca Deli calls it quits - Fresca Deli, located in the CalPERS building at 400 Q St., closed its doors earlier this month. The restaurant, which re-branded from Freshii last November, was intended to serve as an alternative to the CalPERS cafeteria for the many state workers in the area as well as local residents. In Sac Press.

Heat Shabu Baru: Some Instruction Required - It was still technically winter last month when we visited Heat Shabu Baru off Broadway. Apropos for eating a shabu-shabu dinner, apparently, as it is considered a winter dish in Japan. Shabu-shabu is not a traditional Japanese dish as it was only introduced to Japan in the last century. Yes, the Japanese had a similar hot pot dish known as sukiyaki. Both sukiyaki and shabu-shabu have hot broths in pots where you cook thin slices of meats and vegetables. The difference is in the broths and in that with sukiyaki you take the cooked meat and then dip it into raw egg, which instantly cooks a thin coating on the meat. Catherine Enfield on Munchie Musings.

Jimmy's - Once inside, the front part of Jimmy's is a convenience store carrying a smattering of snacks, sodas, along with a few hard-to-find Cajun food brands like Blue Runner, Camellia, and Cajun Injector. The back portion of the store though is where the action's at. The back serves takeout to its customers- breakfast, lunch and dinner. The entree menu ranges from: fried/smothered chicken, catfish, red snapper, ribs, meat loaf, ox tail, chitterlings and gumbo. The sides menu is equally as impressive: grits, mac and cheese, red beans, black-eyed peas, yams, greens, cabbage and potatoes. Ally Gaffan on A Girl and Her Fork.