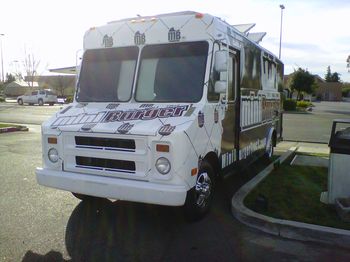 Following in the footsteps tire tracks of Drewski's Hot Rod Kitchen, Mini Burger Truck is looking to open permanent location to augment its mobile food business in the fall, reports Chris Macias in the Sac Bee.

The final details on Vculek's lease are still being worked out, but Vculek plans to serve an expanded version of his burger-themed menu. The exact location should be announced soon. However, there's one catch. Once its second truck goes online, MiniBurger will begin operating under a different name. Vculek wasn't able to trademark the name "MiniBurger" because it was too general, so the new as-yet-untitled name will have more of a brandable and catchy ring to it.

Macias also reports that Mini Burger Truck is about to expand its fleet, but Cowtown Eats readers knew about that back in August 2011.

Burger scandals in East Sac, and how they can be resolved - Two of the best gourmet hamburgers on planet earth can both be found on J Street within a couple of blocks of one another in East Sacramento. But life at the top isn't all it's cracked up to be. In fact, there's burger-centric controversy simmering at both restaurants - Juno's Kitchen and Delicatessen and Formoli's Bistro. Blair Anthony Robertson in the Sac Bee.

Whiskeys Galore - The folks at de Vere’s Irish Pub in downtown Sacramento pride themselves on knowing their Glenlivet from their Glenfiddich. In fact, the bar boasts the largest and most varied collection of fine whiskeys in the metro area. “We try to find things that are a little bit random,” says co-owner Henry de Vere White. Catherine Warmerdam in Sac Mag.

New Chinese restaurant for Fifth and Broadway - A family from China with a successful restaurant on Watt Avenue is opening a new Chinese eatery at Fifth Street and Broadway later this month. Tan’s China Bistro will open once inspections are completed in the 2,400-square-foot space formerly occupied by Hong Kong Cafe at 501 Broadway, said Andy Tan, whose family owns the new business. Brandon Darnell in Sac Press.

Check it Out: Kathmandu Kitchen - I happen to be a big fan of garbanzo beans (also known as chickpeas), but can’t seem to get anyone else in my family to eat them. The other night, longing for a gluttonous serving of the tasty legumes, I made my way to Kathmandu Kitchen on Broadway and ordered not one – but two – dishes starring garbanzos. The chana masala is a lovely tomato-based stew with fresh herbs and spices; the saag chana masala combines fresh spinach and garbanzo beans into a delectable, toothsome (vegetarian) feast. Kira O'Donnell in Sac Mag.