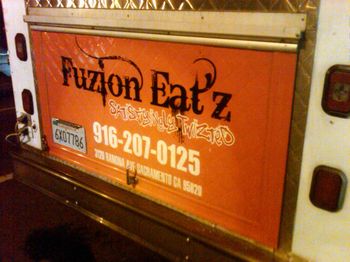 Every time I hear about a new food truck, I start trying to figure out how when they’ll be in my neighborhood next so I can give the truck a try. The same held true for Fuzion Eatz, a truck that specializes in gyros, “sam'mchs,” waffle fries and salads, when it hit the scene in earnest late last year.

But Fuzion Eatz proved elusive. Even when I was able to align my schedule with theirs, they’d run out of food by the time I got there, or they’d have a last second change in plans. Such are the growing pains of a small business. While I wasn’t happy about it, I understand that they’re still getting their act together.

I finally caught up with them on Second Saturday at about 6 p.m. Since their self-proclaimed specialty is gyros, I ordered the “Pancho Villa” gyro along with a “Rosemary’s Baby” sam’mchs and waffle fries.

The Pancho Villa gyro ($7) comes with seasoned lamb, grilled and served on an onion nan flat bread topped with cucumber Salsa (red onions, tomatoes, cilantro & cucumbers), pickled jalapenos and a guacamole and lime tzatziki sauce. While I’m glad the food truck found a unique niche in the Sacramento mobile food scene, I thought the gyro was an average food truck entree. I’ll admit that I’m not a gyro connoisseur. My frame of reference for what I consider a good gyro is Petra Greek, located in the Firestone Building. If you order this, I’d also like to warn you that the peppers on the gyro are very spicy. While they may be suitable for those who like their food somewhere between very, very spicy and ludicrously spicy (like Sac News & Review food critic Greg Lucas), the jalapenos are not for mere mortals who have a delicate palate like me. 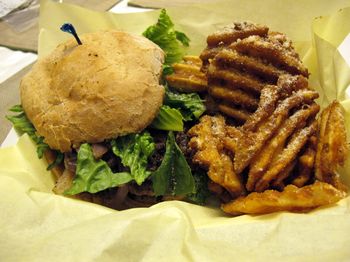 While I found the gyro underwhelming, I absolutely loved the Rosemary’s Baby burger ($6), which is served with five ounces of ground Angus beef infused with rosemary and feta cheese topped with whiskey grilled onions, tomatoes, lettuce and a waffle fry served on a bacon ranch telera roll. The bun, which are commonly used for Mexican tortas, was fantastic, the patty was juicy and the combination of the grilled onions and the waffle fry made it an outstanding burger. I’d definitely recommend this burger to anybody who eats at Fuzion Eats.

The third item I ordered was the waffle fries ($2.50). I ate one as soon as my order was handed out the truck window, and unfortunately, they were cold. Oddly enough, they somehow retained their crispiness as they cooled down, but that wasn’t enough to make up for that fact that it was clear that my fries had been made long ago. I understand that it’s hard to forecast demand at a food truck, but the otherwise solid waffle fries could have been great had they been fresh.

Overall, my dinner at Fuzion Eatz was uneven. I loved the Rosemary’s Baby burger, was disappointed by the Pancho Villa gyro, and had hope for the waffle fries. They have all cullinary talent and unique concept necessary to be a very successful food truck. They just need to get their execution right.

Fuzion Eats can be found on Facebook or Twitter, @FuzionEatz. Those looking to save a couple bucks can get a $10 for $15 deal for Fuzion Eats via Yelp.

Try the fresh pasta at THE PASTA QUEEN #25. All freshly made, will be serving hot lunch, and you can buy "take & make" packages for dinner if you can't handle the crowds and want your own private fresh pasta experience. Hot Lunch: Porcini & truffle ravioli in porcini cream sauce with garlic bread $8., lemon ricotta ravioli with lemon,basil butter sauce w/garlic bread $7.,or two big meatballs in a spicy red sauce with garlic bread $3.00. Ciao, c u in line!