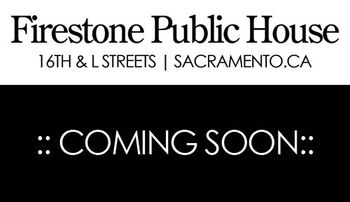 It seems that every new restaurant encounters unforseen delays as they try to open. Firestone Public House, which replaces California Pizza Kitchen at 16th & L, was originally scheduled to open in February, started hiring staff for an April opening, and how finally has a new opening date - Friday May 11, reports Bob Shallit in the Sac Bee.

Restaurateur Mason Wong is promising a new look and some culinary surprises at the Firestone Public House sports bar he's set to open on May 11...

Wong plans to have 60 beers on tap and a menu with meats smoked on-site, pizza cooked in a $50,00 Wood Stone oven left there by CPK and a couple of tantalizing dishes Wong discovered on a trip to Chicago: soft-shell crab tacos and a dessert made by deep- frying ice cream wrapped in carrot cake.

Read the entire article in the Sac Bee. (Third Item.)

Pork Belly Grub Shack: A Gut Feeling - Pork Belly has a great balance of simple and tasty comfort food combined with Asian influences that make for a very approachable menu. Don’t let the name mislead you into thinking that there’s going to be heaps of pork belly on every plate. Many of the dishes like the Catfish Po-Boy ($7.50) on a French baguette with housemade slaw and tartar sauce or the Porkless bella Burger ($7.00), a portabella mushroom burger with jack cheese, tomatoes, greens and truffle oil, don’t have pork belly on them at all. The ones that do however, like the Asian Street Tacos ($1.75 each) with pork belly in corn tortillas with pickled carrots, daikon, cilantro, spicy teriyaki sauce and lemon pepper aioli, are absolute home runs and showcase the fatty cut of pork in all its glory. Adam Saake in Submerge Mag.

Vince’s Ristorante: Pass the cannelloni - Entering Vince’s it’s hard to ignore the vibe of being in some vanished Mad Men world, a tiny vestige of the pre-Laguna era Elk Grove where the population still hovered under 11,000, and there are no stoplights and plenty of tractor traffic. A place where a basket of saltines accompanies the minestrone or salad starter. Greg Lucas in Sac News & Review.

Lodi Wine Tour - It’s not Napa, Amador or El Dorado, yet has become just about as sexy. As a wine tasting destination, Lodi is close to home yet scenically rural, and its fees are nominal—often waived with a bottle purchase—or nonexistent. Unless you venture down for one of the big events such as February’s Wine & Chocolate or May’s ZinFest, crowds are minimal and you’ll have no trouble bellying up to the tasting bar for a chat with well-informed pourers or, often, the winemakers themselves. Krista Minard in Sac Mag.

Temple Coffee House - It's a great spot to catch a few rays of sunshine while catching up with a friend or reading a book. It's like being in a mini-backyard. Temple also serves up a mean cup of coffee. I really like their Brazilian and Guatemalan roasts. Ally Gaffan on A Girl & Her Fork.