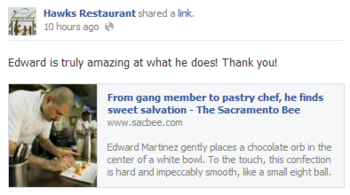 Everybody loves a good story of redemption. The Sac Bee's Chris Macias has a great story involving Edward Martinez, a gang member who turned his life around and is now one of the top pastry chefs in the region.

Martinez serves as executive pastry chef of Hawks in Granite Bay, which specializes in seasonal ingredients and is among the region's finest restaurants. Even in a chocolate-stained apron, Martinez doesn't look like a guy you'd want to mess with. He stands over 6 feet tall with a shaved head and a black widow spider on the back of his neck. His body is an evolving canvas of tattoos, some of which hark back to a past that he's since left behind: membership in one of California's most notorious street gangs.

Learning to make pastries may have saved Martinez's life, or at least spared him a stretch in the state penitentiary. In 2005, facing three felony charges, Martinez promised to enroll in a pastry-making program, leading to a reduced sentence – and perhaps a last chance at an honest life.

Martinez's Facebook photos show a collage of the sweet and a bitter taste of his past. There's a shot of his moelloux of white chocolate, compressed mandarins, pistachio macaron and mandarin sorbet; an "I heart foie gras" T-shirt sported by his baby son; and the casket of one of Martinez's homeboys from his Fresno gang days being lowered into the earth.

Read the entire story in the Sac Bee. I promise you it'll be worth your time.

Roseville to review food truck rules - The Roseville City Council will discuss at tonight's meeting a call for more restrictive rules for food trucks. The discussion comes even as the city is working to build downtown foot traffic by attracting more of the mobile vendors. The push for tighter regulation of food trucks in Roseville comes from the owners of an Old Town hot dog establishment. Ed Fletcher in the Sac Bee.

The Kitchen: Standard-bearer - So when Sacramento’s own The Kitchen Restaurant was nominated as one of 20 of the nation’s most outstanding restaurants, the news brought surprise and shock to the Selland Family Restaurant Group. “We were blown away by the whole thing,” says The Kitchen owner and Executive Chef Randall Selland. “If you look at the list of restaurants, it’s just phenomenal.” Adam Saake in Submerge Mag.

Local chefs featured on Discovery Channel pilot episode - A cable TV show called "Top Eats" is being developed for the Discovery Channel, and one of the pilot episodes was filmed right here in Sacramento. A camera crew recently descended on midtown's Lounge ON20, where executive chef Pajo Bruich showed off some of the techniques he uses to create some of the city's most cutting-edge food. Also featured was Edward Martinez, the pastry chef of Hawks who left behind his street gang roots to be become one of northern California's most creative pastry chefs. Blair Anthony Robertson in the Sac Bee.

Hype about Kru Restaurant - Working at two Japanese restaurants I have a very high expectation of Japanese food. I work at Nishiki in downtown, and Mikuni in Elk Grove. I grew up eating Japanese food often so I wondered if the food was as delicious as described in reviews...Overall I can see what the hype was all about. Though this place is a little pricier than most Japanese restaurants, it does live up to its reputation. Trying this restaurant out is a must. Ashley Yu in Sac Press.

Lunch Break: Indo Cafe - Bordering the east side of the railroad tracks are the old railroad storage sheds that have been converted into shops and eateries. Over the years many of the businesses have closed, not being able to survive on tourists alone, especially during the off season. One eatery that has survived over the years is the Indo Cafe, located at the south end of the sheds. I tend to make the trek to Old Sac for lunch on the occasional sunny day and if it's been a long time, I often wonder if it's still going to be there. Thankfully it is. Catherine EnField on Munchie Musings.