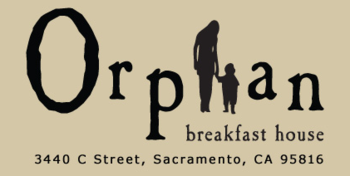 I hear mixed things about Orphan at 34th & C in East Sac. On the one hand, Sac Bee's Blair Anthony Robertson said that it "badly needs to adopt the idea of flavor." Sac News & Review's Greg Lucas gave it 3 out of 5 stars, saying that all the dishes were very similar. But that was back in 2010. More than 2 years later, Sac Mag's Kira O'Donnell seems to imply the place has turned the corner.

"I was lucky enough to visit recently to try the restaurant’s glorious “King Cakes,” buttermilk pancakes with a generous addition of peanut butter, chocolate chips and bananas. A ridiculously satisfying, sweet mélange of complimentary flavors, I’m sure the indulgent dish packed in enough calories (plus a few hundred) to cover me for the rest of my day. (Note: other not-to-miss breakfast items at Orphan Breakfast House include the hefty roast beef hash and the scrumptious artichoke scramble, served up with crusty rosemary potatoes).

Other close friends have said the place is a great place to grab brunch during the summer. I've never been, but I'm now intrigued enough to give it a try.

Old Sacramento’s Fat City gets a menu makeover - And while the restaurant refreshes its menu a bit every year, the crew at Fat City, led by matriarch and chef Lina Fat, introduced a slew of new menu options this week. Among them: a pesto turkey burger with provolone and cranberry mayonnaise, and a shrimp and artichoke heart fettuccine with tomatoes in a white wine butter sauce. In Sactown Mag.

Chef David Hill set to open a second restaurant - Here's some exciting news out of Roseville (and Rocklin). David Hill's restaurant in Rocklin, The Chef's Table, opened three years ago and immediately had to confront two formidable obstacles - the plethora of chain restaurants in the area and the horrible economy that was prompting consumers to scale back on eating out. So what's the good news? The Chef's Table has done so well and has become such a fixture in the community that Hill is opening a second restaurant, to be called Hill's Kitchen, at the site of the short-lived Pause restaurant in Roseville. The concept for the new place, which is slated to open in early June, is sure to attract attention in a town not known for its seafood. Blair Anthony Robertson in the Sac Bee.

Tasty Beginnings: 5 Great Meal Starters - Why jump directly into a restaurant entrée when you can rouse your palate (and your appetite) with a vivacious, flavorful meal-starter? Here’s five of our favorites, featuring Famous Kabob, Carpe Vino, Back Wine Bar & Bistro, Anatolian Table and Lemon Grass Restaurant. Kira O'Donnell in Sac Mag.

Siam Restaurant: A steady Thai burn - Siam Restaurant was once the favored haunt of Tom Hayes, the state’s former treasurer, auditor general and director of the department of finance. Tom knew the owner, and had spent lots of time in Southeast Asia, both in war and as an adviser to what were, several decades ago, emerging economies. Thus, if anyone can make an informed judgment as to the quality of a Sacramento Thai restaurant, it would be someone who has eaten a fair amount of meals in Thailand where the “Thai hot” spiciness level is the norm, not a dare to American diners. Greg Lucas in Sac News & Review.