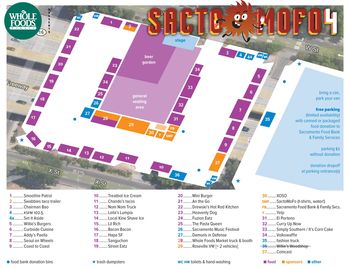 The fourth installment of SactoMoFo is tomorrow from 11 a.m. to 6 p.m. at the corners of X and 6th streets. If it's anything like the previous versions, that means that it will be crowded, the lines will be long, and some places will run out of food. But it also means that it'll be worth it. Here are a few tips from a veteran.

Parking: There's plenty of street parking around there. But if you've ever tried to go to the Farmer's market on Sunday mornings, you know parking may be tough. I suggest parking around Southside Park or on Broadway. You'll have to walk a block or two, but you won't be fighting the crowds. Don't forget to bring change. You'll probably still have to pay for parking if you find a metered spot.

Be Early: The shortest lines are always at the beginning. I suggest that you turn SactoMoFo into brunch. I plan on getting there at 10:30 and getting out of there by noon.

Bring Friends: It's impossible to eat that much food. Bring 3 friends and split up to get your food. Then meet back and try a little of everything. Think of it as a tapas or dim sum style lunch.

Bring Cash: Most of the vendors have the ability to accept credit cards. But may not, and you don't want to have to wait in line for 45 mins only to find out that the truck doesn't accept plastic.

Bring Water: It's going to be hot.

Do you have a tip of your own? Leave it for others in the comments below.

SactoMoFo: One Year Later - Next Saturday is SactoMoFo 4, which is almost exactly a year after the first one. When my ex-partners and I created SactoMoFo, it was to bring awareness to the restrictive food truck ordinances in Sacramento. To do that, we held the first Sacramento Mobile Food (SactoMoFo) Festival at Fremont Park. Note: I left SacoMoFo last summer to pursue my own interests and truck advocacy under my other site, SacFoodTrucks.net.  To say it was a success is an understatement. On a beautiful, sunny day there were about 10,000 people coming to enjoy the new generation of food trucks. And even though there were two hour lines and trucks that ran out of food, everyone was happy! The overwhelming feedback we got from the event was that it was a fun day and WE WANT FOOD TRUCKS! Even better, the restaurants in a one mile radius were also swamped from the overflow and had their best days ever. Catherine Enfield on Munchie Musings.

Beer and wine garden confirmed for food truck festival - That's right, you can now get a beer after stopping by the Chairman Bao truck, or woofing down a grilled sandwich from Drewski's Hot Rod Kitchen. For the first time, a beer and wine garden will be part of SactoMoFo, the series of mobile food festivals that draws thousands to each event. Though the event will be held on Saturday from 11 a.m. to 6 p.m. at 6th and X streets, alcohol sales were just approved for the event. Chris Macias in the Sac Bee.

30 Second commercial for SactoMoFo after the jump.

Driving ambition on a (toasted) roll - Coast to Coast Sandwiches, co-owned by Ramos and Figueroa, started serving the hungry masses in November and is on track to fulfill the duo's original goal. They're planning to launch a bricks-and-mortar version of their sandwich truck in the near future. Meanwhile, Coast to Coast Sandwiches is one of the latest players in Sacramento's burgeoning food truck scene. With more than two dozen other mobile food vendors from Sacramento and beyond, they'll be slinging plenty of sandwiches on Saturday at SactoMoFo 4. This mobile food festival runs from 11 a.m. to 6 p.m. at Sixth and X streets near Sacramento's Southside Park. Chris Macias in the Sac Bee.

Mobile food vendors join for a fourth SactoMoFo festival - Foodies of Sacramento will be gathering for a fourth SactoMoFo maobile food festival. SactoMoFo 4 will be held from 11 a.m. - 6 p.m. on April 21. There will be more food vendors, more activities, and more space than the previous events. The new location will be at sixth and W streets under the freeway. Allison Thompson in Sac Press.

Try the freshly made pasta at THE PASTA QUEEN space #25 on the map. All freshly made pasta, serving hot lunch and you can buy "take & make" packages for dinner if you can't handle the crowds and want your own private fresh pasta experience. Hot Lunch: Porcini & truffle ravioli in porcini cream sauce with garlic bread $8., lemon ricotta ravioli with lemon,basil butter sauce w/garlic bread $7.,or two big meatballs in a spicy red sauce with garlic bread $3.00. Ciao, c u in line!