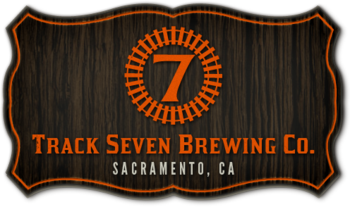 Track 7 Brewing Co. hit the scene at the beginning of the year and immediately had a thousand beer lovers chomping at the bit to sample their microbrews on their opening weekend. They've been on my radar since many food trucks make their brewery a regular weekend stop. I've also had the chance to sample their beer a few times, and while the ones I tasted weren't my favorite styles of beer, you can tell that it's well made and not mass produced. Sac Mag's Catherine Warmerdam has a quick profile of them in this month's Sac Mag.

When Ryan and Jeanna Graham and their friends Geoff and Becca Scott launched Track 7 Brewing Co. this past New Year’s Eve in a Spartan warehouse near Sacramento City College, they had no inkling the craft brewery would be an immediate sensation.

“We thought we would have a gentle rollout and slowly build our brand,” explains Ryan Graham. So naturally he and his partners were taken aback when 1,000 beer enthusiasts showed up on opening day. In fact, demand for Track 7’s artisanal beers—which include a downright delicious American amber, a potent American strong ale and a nicely balanced stout—was so great during the first few weeks of business that they were continually running out of product.

When production is in full swing, customers will have a choice of five to six beers on tap at any time, a mix of standbys and seasonal offerings. The owners recently started selling their brews to local bars and restaurants. Their main goal, however, is to simply meet the demand of the popular taproom. “We thought we would have support in this neighborhood, but we didn’t know it would be quite at this level,” says Graham. “It feels like a neighborhood institution already.”

Old Sacramento’s Firehouse hires new pastry chef - The Firehouse restaurant has a new pastry chef. Nichol Santisteven was most recently a pastry sous chef at the acclaimed Citizen Cake in San Francisco, which closed in December after 14 years in the SoMa district. Prior to that, Santisteven worked in Sacramento at venues like Lucca, McCormick & Schmick’s and Ella. In Sactown Mag.

Goose & Gander ready to open in the former Martini House location - Goose & Gander will open to the public on Tuesday. The replacement for the Martini House arrives sooner than expected, but it’s happening. To quickly recap, Goose & Gander is the brainchild of proprietor Andrew Florsheim, who brought aboard chef Kelly McCown. McCown comes to St. Helena from Sacramento’s celebrated Ella, but before that, he was actually the opening chef de cuisine at Martini House under chef Todd Humphries, so it’s a bit of a homecoming for him. Paolo Lucchesi on SFGate.com.

SideTrax night club sets Labor Day weekend opening date - SideTrax, a night club being built on top of Hot Rod’s near 20th and K streets, is now on pace for a Labor Day weekend opening, and an innovative membership program may be the key to allowing 18- to 20-year-olds access despite the club having a full bar. The venue was initially scheduled to open last spring, but the date had to be pushed back due to construction delays involving design changes and the addition of an extensive patio. Brandon Darnell in Sac Press.

Davis' Rominger West Winery to close - Here's what could be a final toast to Rominger West, a winery on Second Street in Davis. Unless a buyer is found soon, this winery that showcases Yolo County grapes will close. Tastings and live music events are scheduled through April 28, but soon after that, Rominger West will close. "We don't have a specific date, but it's coming quickly," said Mark West, head winemaker. Chris Macias in the Sac Bee.