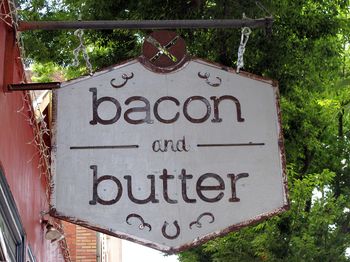 Buzz has been growing for former Golden Bear chef Billy Zoellin’s new venture Bacon & Butter. Sharing a space with Club 21 (Bacon & Butter uses it during the day and Club 21 uses it at night), Bacon & Butter has the feeling of a true small business being held together with blood, sweat, tears and a probably a little duct tape. And honestly, that vibe is endearing and you can’t help but root for them.

We arrived on Saturday at approximately 12:30 p.m. The host said the wait for a table for two would be 15 minutes or so, or we could sit at the bar immediately. We opted for seating at the bar. As the waiter was grabbing our menus, Patrick Mulvaney walked in, also looking to grab brunch at the new restaurant.

The space, which probably seats 60 or so with a mixture of booths, high top bar tables and regular height restaurant tables pushed together to form a communal table, has the same look and feel of the porch of The Golden Bear. It’s really the type of places where people eat hung over on Saturday morning, and not the type of place you’d bring your parents for Mother’s day.

The waiter quickly took our order for beverages (one coffee and one $5 mimosa, served in a mason jar). At the waiter’s recommendation, we ordered the biscuits bacon & gravy - scratch made with wild mushrooms and two eggs ($8.50), and the blueberry & ricotta flapjacks with local blueberry, house ricotta and blueberry bourbon sauce ($7.50).

The service was friendly, but the kinks were clearly still being worked out. For example: after being served coffee, I had to stir the sugar into my coffee with the back of my fork since I wasn’t given a spoon.

After about 20 minutes, the waiter came out and told us that they were out of blueberries for the pancakes. They gave us the option of switching to blackberry, which we quickly accepted. We also ordered a second mimosa, but they had run out of orange juice. Due to the long wait, they comped us a strawberry Bellini.

Thirty five minutes after we ordered, the waiter was very apologetic and said that the kitchen was really backed up. Because they had only been open for a week, they weren’t a well-oiled machine yet, he explained.

During our wait, we noticed that they had a full bar. In addition to mimosas and Bellinis, they also had bloody mary’s, as well as Stella Artois, Sierra Nevada, Blue Moon, Dos Equis Amber, Coors Light and Pabst Blue Ribbon on tap.

Finally, after 45 minutes, our food came. It was worth the wait. 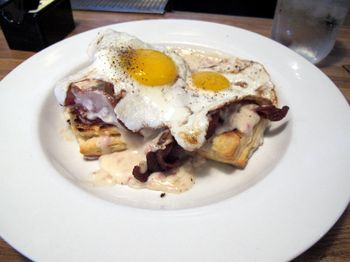 I’ve really only had biscuits from the supermarket Pillsbury vacuum tubes or at hotel breakfasts buffets. These biscuits were amazing. The dish came with 3 or 4 flaky and layered biscuits, with 4 pieces of bacon and smothered in a white gravy. The taste of the gravy was complex and meaty given the wild mushrooms, but I think it should have been served little warmer. Overall, the dish was filling and extremely successful. 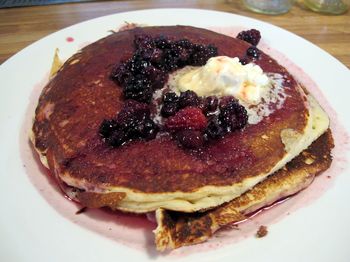 The pancakes were also a delight. The 8-inch pancakes were light, airy and large. The dish was served with a dollop butter and the compote was already drizzled onto the pancakes. It immediately made our top pancakes in Sacramento list.

Our meal ended up costing $31, including tax and tip.

Bacon & Butter isn’t smooth operation - yet. I wouldn’t go if you’re on a tight schedule with places to go and people to see. But on a lazy weekend day, it’s a great place to grab brunch. I can’t wait to go back.