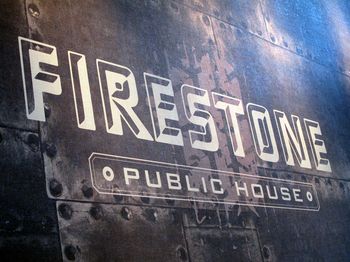 Firestone Public House, a collaboration between the de Vere White family, owners of de Vere’s, and the Wong Family, who run Cafeteria 15L among other ventures, has had high expectations since the day the joint venture was announced.

In the run up to its opening, the owners of Firestone Public House promised a sports bar that served dozens of beer on tap. My initial hope was that it would be a locally-owned version of The Yardhouse, a successful restaurant chain that serves dozens of beer on tap and has a good, albeit corporate, food menu.

I ate dinner at Firestone Public Houes on Saturday evening, the second day it was open to the general public. Arriving at 6:30 p.m., the place was packed, and there was energy in the air. A large bar dominates the entrance area, and it was packed 2 or 3 deep with patrons patiently waiting to order drinks. Immediately, I could tell that this place would be very popular, probably very profitable and it would become a Sacramento mainstay.

I really wanted to like the food and if you’ve read my previous reviews, you know that I’m generally very forgiving of new restaurants as they find their bearings. Mistakes in service and execution are understandable, but what is harder to overlook are issues with a recipe. I also appreciate food at all price points, from food truck fare to more expensive meals. 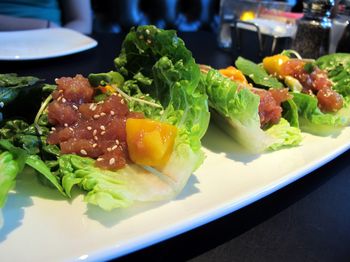 As a starter, my wife and I first ordered the Poke Wrap, with Ahi tuna, avocado, mango, jalapeno and baby romaine ($10). We fell in love with poke during our honeymoon and it has become something we regularly eat, either making it at home or ordering it at restaurants. When eating anything with raw fish in it, the star of the dish should be the raw fish, and that’s how a restaurant can justify charging $10 for an appetizer. The dish was very visually appealing, but, the concept for the dish was flawed. By serving poke on baby romaine, all the diner ends up tasting is romaine, and the taste of the poke is obscured. This type of dish can work – just try the delicious lettuce wrap at Cafeteria 15L. But that dish uses ground meat, and when you bite into the lettuce wrap, the ground meat filling overflows onto your tongue filling it with taste. The poke in this dish was in large chunks, and you get when you bite into the wrap is taste the romaine. I also tried the poke alone separate from the wrap, and it was much too spicy for my taste and overpowered the inherent taste of the tuna. 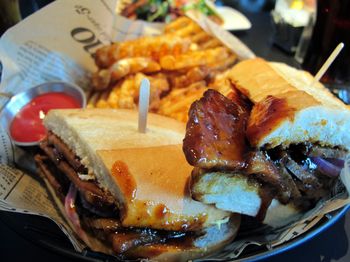 For our first entrée, we ordered the BBQ brisket sandwich with slow roasted brisket, red onions, chipotle BBQ served on a hoagie roll. As a side, I selected criss cut fries, although regular French fries and mixed greens are also offered. This is another dish that was very visually appealing, but another culinary dud. The meat in the sandwich reminded me of summer camp roast beef. If it was slow roasted, it didn’t exhibit any tenderness it should have developed. The fries were another disappointment. I love criss cut fries because there’s so much surface area for extra flavor and crunch. These fries were under seasoned, and when they went into the deep fryer, too many of them stuck together so I got clumps of criss cut fries as opposed to individual tasty fries. 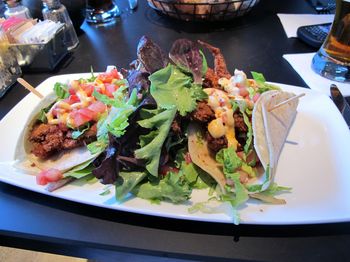 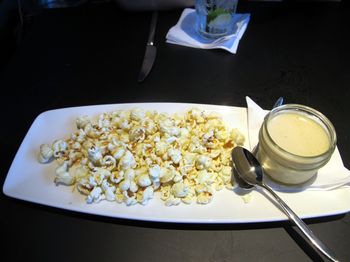 For dessert, we ordered salted caramel pot de creme ($5), a caramel custard served with fresh popcorn with caramel drizzled over it. Despite the description on the menu that the popcorn was fresh, it wasn’t. The soft, rubbery texture of the popcorn meant it had been popped hours earlier. It also looked like a banquet dessert. I imagine that they have hundreds of little containers of caramel custard in the refrigerator. I’m sure they quickly assemble the dessert by adding a hand full of popcorn on the plate and drizzling it with caramel. I know every restaurant does this with their desserts, but since nothing tasted like it was just cooked, it seemed more obvious than usual. Finally, the dish was kind of a one-note dessert – caramel. It could have used a secondary flavor to give the dessert a little more depth.

The one bright spot of the evening was our service by Shaina.  She was cheerful, knowledgeable and willing to find the answers she didn’t know. The food also came out quickly.

Our bill, for one appetizer, two entrees, one dessert and three beers totaled $85, including tax and tip.  At these price points, they’re getting close to Ella or Esquire Grill territory.

I agonized over this review this weekend. As an entertainment experience, I really enjoyed Firestone Public House. It was lively and vibrant, the space is great and its location will really draw in the crowds. But as a restaurant, they have some work to do. Every dish we tried needs to be refined or reimagined. The families who brought us de Vere’s, Cafeteria 15L and the now defunct Mason’s clearly know how to create and execute a good menu. I hope they decide it’s worth the effort at Firestone Public House.

Firestone Public House is located at 16th & L streets and be found online at FirestonePublicHouse.com. You can also find them on Facebook and on Twitter, @FirestonePH.