Daily Dining News: Estelle's Patisserie's Baguette 'Could be Something Purchased in Paris' 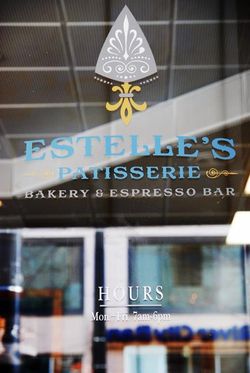 Estelle's Patisserie is a relatively new addition to the corner 9th & K, replacing Danielle's Creperie, which replaced a La Bou. I first tried their macaroons there on the recommendation of a coworker and have been hooked ever since. Apparently, Sac News & Review's Greg Lucas has discovered the place too.

[W]hile the soup and sandwiches are not as varied or nuanced as those of Daniel Pont at the previous La Bonne Soupe Café, the 12-inch Brie, prosciutto and arugula on a fresh and flaky baguette—other than not being wrapped in white paper—could be something purchased at Montparnasse Train Station in Paris and contentedly munched between sips of rosé on the one-hour ride to Tours. One of the authentic touches here is the spare—often nonexistent—use of condiments. No mayo or mustard slathered on these sandwiches. The smoked salmon is enlivened by dill and the flavor of its croissant. The Brie, prosciutto and sharp arugula are offset by the sweet baguette. Like a traditional salade lyonnaise in which four dots of mustard comprise the sole counterpoint to the frisée, lardoons and egg. Similarly, Estelle’s roast beef and Gruyère with red onion is a sandwich in which the roast beef is almost incidental to the flavor of the brioche it is wedged between. The ripe red grapes in the tuna salad add both color and a tasty contrast. This sandwich is best on the roll with the nuts and cranberries.

Free Krispy Kreme donuts Friday in Roseville - Somewhere behind Groundhog's Day and National Grilled Cheese Day we find another chance to reflect on a favorite national past time. That would be June 1, also known as National Doughnut Day. To celebrate this holiest of publicist-driven holidays, Krispy Kreme is offering a free donut starting at 12 a.m. Friday in its drive-thru and then inside its store at 5:30 a.m. Here's the fine print: no purchase is necessary, and éclairs or doughnut holes are not eligible in this offer. Chris Macias in the Sac Bee.

Blackbird Kitchen - The highlight of our visit though were the cocktails. I started off with some sort of specialty cocktail made from bourbon and huckleberries that they called Patsy's Punch (I think?)...it was so-so and didn't make much of an impression on me. For my second round, I quickly switched to the Moscow Mule after tasting a friend's. Blackbird's Moscow Mules are served in a cold copper mug with crushed ice, they're not overwhelmingly ginger tasting...the perfect refreshing summer cocktail. Loved it! Too bad they don't have a patio, I could definitely see knocking back a few mugs of these while engaging in some summertime patio drinking. Ally Gaffan on A Girl and Her Fork.

Chef Oliver Ridgeway of Grange talks about his roots – and guilty pleasure (pizza) - Executive Chef Oliver Ridgeway came to Sacramento last year and began working for Grange, the restaurant in the ground floor of the Citizen Hotel at 10th and J streets, when former chef Michael Tuohy left. The Sacramento Press met with Ridgeway, 35, last week to talk about his cooking experience, what he enjoys most and what his take on Sacramento is after spending much of his career in international cuisine. Brandon Darnell in Sac Press.

In-N-Out on its way in soon - The newest local In-N-Out Burger location in Sacramento is ahead of schedule, but not so far ahead that the company knows when it will open. The store is at 2001 Alta Arden Expressway just east of Arden Fair. Construction on the site of the former Romano’s Macaroni Grill started this year, and is running ahead of schedule for a July opening. But the company doesn’t like to name a date until its locations have passed final inspection. Mark Anderson in Sac Biz Journal.

Street Food Rodeo - The first ever Street Food Rodeo takes place in Davis on Friday, June 1, and it will be one food roundup you won’t want to miss. The Street Food Rodeo is closing off a block of Sixth Street to bring something delicious to the city for everyone to enjoy. Laura O'Brien in Sac Mag.