Cowtown Eats
Mon Tues Wed Thurs Fri Sat Sun About
Eat It!: Snow Cone at Osaka-Ya
Buy One, Get One Free at Peet's on Father's Day

Daily Dining News: Second Act for Brew it Up? 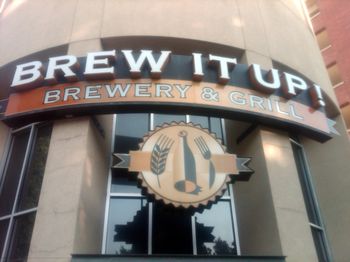 Often, the secret to success is learning from your mistakes. Mike Costello, owner of the former Brew it Up, seems to have studied his mistakes and is now looking for investors to rebuild the parts of Brew it Up that were successfull, reports Brandon Darnell in Sac Press.

“It all comes down to money,” he said, adding that while he has pledges of about $300,000, the potential investors don’t have quick access to the money, and he's looking for something more solid in the next month.

“Basically, the long and the short of it is that the concept of Brew it Up! worked,” Costello said. “We just pushed the finer dining aspect of it too hard.”

Costello said he will not own the next business, Brewhouse Concepts Land & Management, but will be an employee. Any new business will likely be run by a board of directors made up of investors.

Summer Sippers a Sweet Deal at the Grange Restaurant & Bar - For nostalgia reasons (and because the wine list is superb), I invited a few girlfriends to join me at the Grange for a glass of wine last Friday evening. When I asked about the specials, I was thrilled when the server informed me that every Friday for the entire summer the Grange is offering 50 percent off every bottle of wine on their list. So the glass-of-wine idea was thrown out the window and we, of course, ordered a bottle. Meagan Cross on Sac Foodies.

Piatti Ristorante to close in August for a two-month renovation - In May, Piatti Ristorante & Bar marked its 20th year of serving a loyal clientele at the upscale Pavilions center. Now it's preparing for a new look. "We'll be doing a major renovation, tentatively starting in the second week of August, and will be closed for approximately eight weeks," said general manager Kelly Brean on the phone today. "We're not excited about being closed for that much time, but everybody's excited about the project." Allen Pierleoni in the Sac Bee.

Sugar and Spice closes retail shop to focus on wholesale, catering - Sugar and Spice isn't going out of business, but Jones is revamping the concept to focus on the wholesale and catering parts and closing the retail component - at least for now...But the retail part wasn't pulling its weight, she said. It needed bring in more foot traffic and make more money for it to continue. Part of the problem was exposure. While Jones and her business have received plenty of glowing publicity, not everyone knew where she was. It was difficult for motorists on heavily traveled 12th Street to catch a glimpse of her sign. She said the landlord for the building placed limitations on signage for historic preservation reasons, so she made due with a sign painted onto the glass door. Blair Anthony Robertson in the Sac Bee.

New bus makes bar hopping easy, safe - A new central city hop-on/hop-off bus route begins June 22, and it aims to provide a low-cost shuttle service between restaurants and bars on the weekends, according to owner Laura Allen. Called the Lil' Hopper, the 27-seat bus will make 30-minute loops throughout downtown and Midtown. It will likely start at 7:15 p.m. and end at 1 a.m. Brandon Darnell in Sac Press.