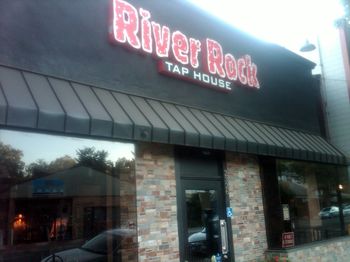 River Rock Tap House opened in July 2011, and a year later, they've gone out of business, according to a tweet yesterday evening.

Honestly, I'm a little surprised the business closed. While I had no insight into their finances, they consistently ranked in the Top 15 Most Popular Happy Hours and people seemed to like the place. Maybe there's more to this story.

The Kitchen named among "America's 20 Best Date Restaurants" - The Kitchen was named among some of the country's finest restaurants, including New York City's Blue Hill Farm, Chicago's Tru and Canlis in Seattle. A date at The Kitchen is certainly a classy move with its epic wine cellar and gourmet demonstration dinner - though would-be lotharios should be ready to pay $250 for dinner for two, not including wine. Chris Macias in the Sac Bee.

California Farmstead Cheese Plate at Magpie Café, Sacramento - Oh, the beauty that is an artisan cheese plate. It can be an appetizer, a snack, or even (well, often, in my case) a meal in itself. Although, the challenge when ordering a cheese plate while dining out is that you can never quite be sure what you’re going to get. A few small nibbles for 20 bucks? Quite possibly. More crostini than cheese? Fairly common. On a recent visit to Magpie Café, a SacFoodies favorite, I was delighted to encounter the California Farmstead Cheese Plate. For what felt like a steal at $14, this cheese board is loaded with an assortment of locally produced cheeses served alongside crostini, dried dates, fresh figs and sliced pear. Jenna Buhaglar on Sac Foodies.

Freebirds taco eatery will replace a Qdoba in Sacramento - Qdoba Mexican Grill on Del Paso Road in Sacramento has closed and will be replaced next month by a Freebirds World Burrito outlet. Colorado-based Qdoba, which is owned by Jack in the Box, confirmed that its restaurant at 2281 Del Paso Road had closed and would be replaced by Freebirds. Mark Glover in the Sac Bee.

Midtown Taqueria - For the past several years, Mr. S. and I have frequented Midtown Taqueria on J Street. The staff's always been friendly, the food's served up fresh and fast and it doesn't do too much damage to our wallets. Now I'm not going to get in a pissing contest with you over whether this place is the most authentic Mexican place in town, whether it cooks their dishes like your abuela used to or if it only uses locally grown veggies and grass-fed meats...because in all likelihood it doesn't. And quite frankly, I could care less. I've never had a bad meal there, left hungry or had awful service so they must be doing something right. Ally Gaffan on A Girl & Her Fork.

I dont see El Centro on 28th and J listed..they have the BEST Margarita's, Guacamole and squid/shrimp appetizer in town..

I'm not surprised River Rock closed. They never filled out their taps, and the staff had limited knowledge of the craft beers they served. The space didn't feel welcoming or comfortable.