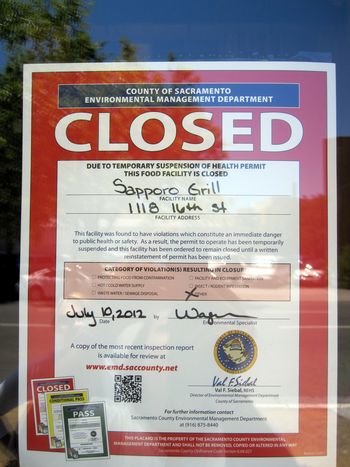 Sapporo Grill was closed yesterday due accumulating 4 or more yellow placards in a two year period, according to the Sacramento County Environmental Management Department (commonly known as the health department). It is expected to reopen today.

Sapporo Grill was closed yesterday due to the second reason - multiple, lessor violations. The inspector did not find any immediate danger to public health or safety such as rats or cockroaches at their most recent inspection in mid May, but at the order of an administrative judge, they were ordered closed for one day for receiving multiple yellow placards.

For those who think this is a harsh punishment for a restaurant, the county says they provide multiple chances for a restaurant to avoid this fate. After a yellow placard is issued, restaurants are offered classes on food safety, training for their entire staff and even meetings with the county to discuss specific steps that can be taken to correct food safety issues. The level of training they receive depends on how many violations they've received.

When contacted for comment yesterday, the woman speaking for Sapporo Grill said only that the restaurant was closed for cleaning and would be reopen tomorrow. (A sign on their door yesterday said they were closed for a private event.) 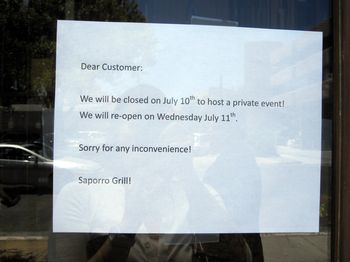 If you've read the county's online reports, almost all restaurants have some sort of violation. (BTW: Sometimes ignorance is bliss. Don't read the reports for your favorite restaurant unless you really want to know.) Last year, even La Bonne Soupe Cafe, then run by Daniel Pont, was given a red placard for a cockroach infestation. It happens to even the most meticulous and careful chefs. Click here to search the county's food inspection reports.

The County says that any restaurant open for business and selling food has passed inspection. Despite their one day closure yesterday, I plan to continue eating at Sapporo Grill.

Tako Korean BBQ to open Friday, with a marriage of cuisines - The last time I talked with Alex Won and his business partner, Yoon Hee Cho, was in 2006. The occasion was a "Counter Culture" review of their Folsom Boulevard 'cue joint, Yunece 61 Smoked Barbecue & Grill. On its menu, crispy spring rolls, taquitos and teriyaki salmon met hickory-smoked pork and beef ribs, tri-tip and hot links. An intriguing blend of cuisines, a curiosity at the time. The food was tops, and the restaurant had a good run before its not-so-good location finally did it in. Now Won and Cho have re-teamed to create Tako Korean BBQ, opening Friday at the intersection of Alhambra Boulevard and T Street. Allen Pierleoni in the Sac Bee.

Fox & Goose adds Churchill-themed banquet room - A private banquet room modeled after the home of Winston Churchill is the most recent addition to Fox & Goose Public House at 10th and R streets, and owner Allyson Dalton said it has a World War II theme with a modern twist. Brandon Darnell in Sac Press.

Bacon Fest announces BLT Week and a BLT bike crawl - Back in January, Bacon Fest proved to be exceptionally popular with food lovers as well as lucrative for local restaurants and pubs that participated. Fast forward to summer, and restaurateurs are eager to get involved with a new Bacon Fest-sponsored event: "Bacon Fest Sacramento presents BLT Week 2012." Blair Anthony Robertson in the Sac Bee.

Big (deep-fried) fun - Foodies, take note: The California State Fair is just around the corner, opening Thursday, July 12. One thing beer and food enthusiasts might enjoy is a celebration of the fair’s Commercial Craft Brewing competition winners at the Friends of the California State Fair Brewfest, happening Saturday, July 28. But even before that, you’ll certainly have a plethora of beer and wine drinking options, and plenty of fried food to soak up all of that alcohol. Jonathan Mendick in the Sac News & Review.

VIDEO: Wacky State Fair Foods - California's State Fair has made the list for having some of the wackiest fair food. On Good Day Sacramento.

they should have left the bar open...