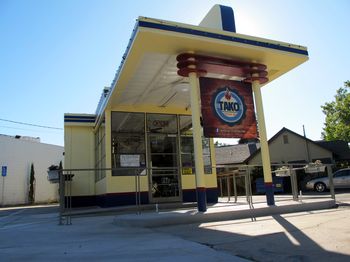 Tako Korean BBQ opened on Friday, offering Sacramentans Korean and Mexican fusion.  Located in a former gas station at the corner of Alhambra and T streets, the restaurant, inspired by the cuisine originally pioneered by LA-based food truck Kogi and also offered by Gogi Korean BBQ at 15th & L, offers a menu with tacos filled with Korean short rib, kimchi Quesadillas and burritos stuffed with spicy pork or tofu.

I decided to skip the inevitable growing pains of the first day and grabbed lunch there on Saturday. Even before you arrive, it’s clear that if the place gets popular, parking may be an issue. Their parking lot holds a half dozen or so cars, with the remaining cars spilling into the residential streets nearby.

Their menu works a lot like the menu at Chipotle. You first choose what item you want ($6 burrito, $7 for three soft tacos or $6 rice bowl) and then the meat (marinated steak, spicy pork, chicken, fire chicken or tofu. Short rib is available for an additional $1). Additionally, they have “favorites” – three bulgogi (marinated steak) sliders for $6 and a kimchi quesadilla for $5.

At the suggestion of the cashier, I ordered 3 tacos with short ribs and the bulgogi sliders. I tried to order the tacos with a different meat in each one, but that’s not allowed. I hope that changes soon.

The wait for our order was short - about 5 minutes. There’s no table service. They call your name and you grab the food from the counter. 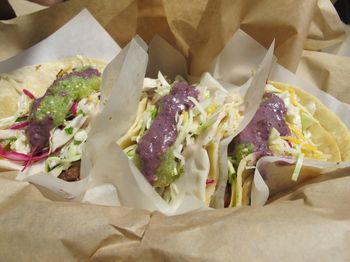 The tacos came topped with a blueberry/plum sauce and grated cheese, and served on warm tortillas. The short ribs were tasty, and the acidity of the sauces and pickled cabbage helped cut through some of the fattiness of the short rib. If I had one minor criticism, it’d be that the cheese wasn’t melted. 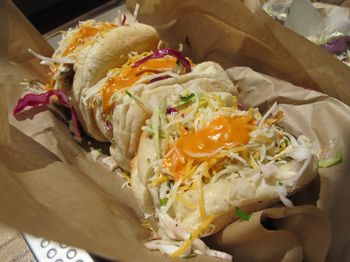 The sliders were my favorite dish of the meal, and the best of the part of the sliders was the bread. It was soft and flavorful and had an innovation that I really appreciated – slicing the loaf on one side and leaving a sliver of bread to hold the top and bottom buns together. Too often, I’ve had sliders that fall apart after the first bite. This technique smartly solved that issue. But that innovation caused another problem – inconsistent cutting of the bread so that some were cut almost all the way through so there was meat in every bite, and others which were cut only half way so I had a couple bites of bread alone at the end.  As with the tacos, I wish the cheese were melted. In the end, though, this is a problem that I can overlook as an execution issue that will get ironed out as time goes on.

Tako Korean BBQ is off to a good start. It has a good concept and its individual ingredients are scrumptious. As with any other new establishment, they have execution imperfections that when fixed, will lead to better and more consistent food. Once they get the basics right, I also hope they add specials to the menu. I understand the desire to start with a simple menu and then expand from there, but they’re only scratching the surface of the fusion of Korean and Mexican cuisines.

I think this place will ultimately be successful. It serves good quality food at decent prices in a neighborhood without a lot of restaurant options. Personally, my first trip there was good enough to warrant a second visit soon to try the rest of the menu – especially the burritos and kimchi quesadilla.

Tako Korean BBQ is located at 3030 T St, and can be found online at www.Facebook.com/TakoSac and on Twitter, @TakoBBQSac.

They let my pal get get different meats with his tacos!