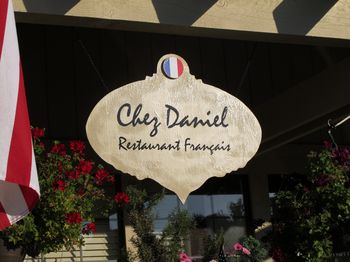 The salad was plain and simple, uninspired, a little tired and not so tasty. The four of us nodded in agreement as we picked through the greenery: disheartening.

The food straddles the line between bistro fare and fine dining, but the courses are not elevated enough or original enough to work as a prix fixe experience.

Some in California Skirt a Ban on Foie Gras - Seemingly an afterthought, the last appetizer listed on the menu at Restaurant Thir13en is a brioche that, at $21, may sound overpriced even if it is “house made” and comes with strawberry rhubarb purée and a bacon chip. Accompanying it, though, are “complimentary seared foie gras and foie panna cotta.” Norimitsu Onishi in the New York Times.

County receives two complaints for local restaurants serving foie gras - Downtown's Restaurant Thir13en and its chef/owner, Adam Pechal, received national press with a feature in Sunday's New York Times. But instead of a review or rundown of Sacramento's culinary scene, the article focused on California chefs who are flouting the state's ban on foie gras. The article features a picture of Pechal preparing a foie gras appetizer - a "complimentary" item, as to skirt the law - and details how he stockpiled on foie gras before the July 1 ban. Chris Macias in the Sac Bee.

What is the Sacramento Treat? - Leave your beer-snob card at the door when you order a Sacramento Treat. This simple cure for the triple-digit heat is a modest mix of cheap lager beer (I like Hamm’s; but any will do), fresh lemon (squeezed and garnished) and ice in a mug (ice goes in last, or else it’s Foam City). Not the most original concoction ever, sure, but a decidedly Sacramento one at that. Nick Miller in Sac News & Review.

Natomas Freebirds Opens Today - Freebirds World Burrito announced today it will open on August 14 in Natomas. To celebrate, Freebirds will give the first 25 guests in line free burritos for a year. On Natomas Buzz.