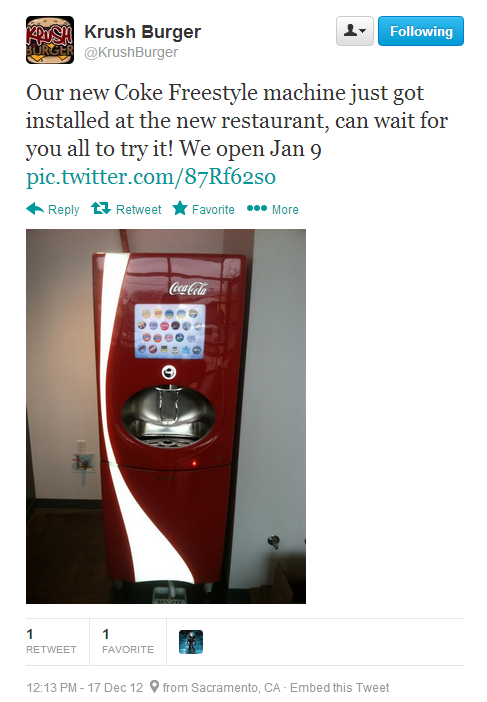 Krush Burger, Sacramento's most pioneering food truck, announced in Sept. that they would be adding a brick and mortar location in the River District (off Richards Blvd.). Now they have an opening date for their new location -- Jan. 9 (and they're hiring too).

As much as I like chasing mobile food trucks around the city, I'm glad that another one has found a stable place to sell their food from.

Speaking of mobile food vendors finding a more permanent home, El Matador Mobile Mex, a food truck who doesn't visit the downtown region enough, is teaming up with the VFW hall in Folsom to serve food every Tuesday. According to their owner in an interview earlier in the week, they already use the space as their commisary, and have added regular food service. They will continue to operate the rest of the time as a standard food truck, including their weekly Thursday visits to the Loomis Basin Brewery.

Matador is going Brick & Mortar! We are teaming up with VFW 6604 1300 Forrest St. in Folsom to provide delicious food and drink! Catch us tonight for Taco Tuesday and some ridiculous drink specials. Happy Hour 4-7!

Sacramento-Area Restaurants Open for Christmas - If December 25 rolls around and you are fa la la la-ed out, then perhaps you can find some yuletide cheer at one of Sacramento’s many restaurants open this year for Christmas. Reservations are filling up fast, so check Open Table to see what’s still available. Kim Bedwell on Sac Foodies.

Celebrity chef Guy Fieri bounces back from NY flap - Guy Fieri, perhaps 2012's most talked about celebrity chef, is home in Santa Rosa for the holidays, getting ready for another non-stop busy year. Last month's much-Tweeted blow-up over his new Guy's American Kitchen & Bar in New York City's Times Square has "blown over," he said. Debbie Arrington in the Sac Bee.

Track 7 Brewing Co. to double in size, release anniversary beers - Track 7, the local microbrewery at the edge of Curtis Park, is going through some big changes - and we mean that in the literal sense. Renovations are underway at Track 7 to double the size of the brewery, which will include a second tasting bar, more bathrooms and increased beer production capacity. Not bad for a homegrown brewery that'll celebrate just its first anniversary on Dec. 31. Chris Macias in the Sac Bee.

How To Hack Chipotle - If you’re reading this, you probably know. But do you know know? Sure, Chipotle is a big deal in your life. You appreciate what Steve Ells, the Steve Jobs of burrito making, has created. It’s not only a big deal, but a good deal, and you know that. But do you know how to make it the best deal? Here’s how. William Hudson in Thought Catalog.