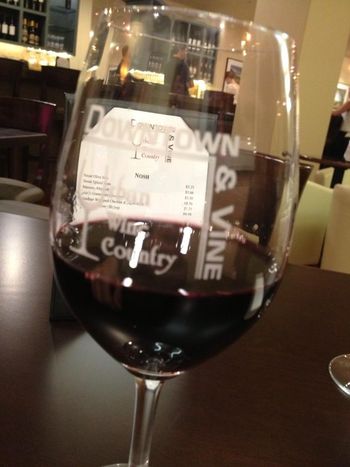 The upscale urban wine tasting room – located at 1200 K Street – opened its doors Friday afternoon after months of preparation. Its owners, Gregg Lamer and Kate Chomco, are both wine educators with hospitality backgrounds and are hoping to bolster the Sacramento area wine scene.

Chomco lives in Napa while Lamer resides in Amador, so Sacramento was a natural half-way point to open a business.

"We love the wine industry," Chomco said. "And this is the center of the wine region in California."

The feature a winery that I had and loved at One Speed on Friday evening -- Vino Noceto -- along with 10 others.

Photo via Sac Bee restaurant critic, @BlaRob's artfully-done tweet. Credit to him for being the first person in my Twitter feed to note the bar's opening.

Hook & Ladder: Industrial Sacramento Meets the Foodie Scene - I was impressed with the thought and detail that went into every inch of the restaurant and hoped the food would live up to my expectations. The brunch menu can be found here. My friends and I were disappointed that they don’t serve bottomless mimosas, but they do have more fruity drink varieties than many brunch spots. In addition to the standard mimosa, there was a breakfast punch on the menu and a range of other cocktails. Most of us went with the bloody Mary, which was peppery and spicy, just how like it. I ordered the crab hash, which was also spicy – more so than I expected. I wish our waiter would have warned me about the heat. We shared plates amongst ourselves, so I had a chance to try the pork quesadilla (surprisingly not spicy like the hash) and the croquet monsier (very yummy). They also serve a breakfast pizza, which I want to try next time. The service was a little slow, but for a new restaurant, all in all, we really enjoyed the experience and will definitely come back. Lisa Page on Girls on the Grid.

New use for old fast food site? West Sac ponders ‘incubator’ for restaurants - West Sacramento leaders are working on a project that would turn an old fast food restaurant somewhere in town into an “incubator” for restaurant startups. “Our idea was to convert an old fast-food joint into a demonstration of how healthy, locally grown food could be produced and sold,” Mayor Christopher Cabaldon told the News-Ledger. “We can provide opportunities for aspiring restaurateurs who want to produce healthy food, but do it without quitting their jobs and taking out a huge loan. Here’s the hardest part – if you want to start a restaurant – and we certainly need more restaurants in West Sacramento – unless you’re a chain, it’s very difficult.” Steve Marschke in the West Sac News-Ledger.

Cosmo Cabaret closing, but Paragary says he'll fill the space - California Musical Theatre has turned out the lights and dropped the curtain on the Cosmo Cabaret. CMT will no longer operate the 200-seat theater at the corner of 10th and K Streets, which it opened in 2008. Last week CMT executive producer Richard Lewis asked his board of directors to sign off on an agreement terminating their lease with developer David Taylor, who owns the building. The state-of-the-art lighting and sound systems will not go unused for long, however, as restaurateur Randy Paragary will take over operation of the theater space to create a night club he plans to call The Assembly. He will open the new club March 1 and intends to have acts booked every night. Marcus Crowder in the Sac Bee.

AUDIO: Lucky Dog Ranch - It was originally started as a way to provide natural beef for dishes at Lucca. Now Ron and Terri Gilliland's venture has taken off and can be found in Taylor’s Market, Elliot’s Natural Foods, local famer's markets and more. Now Lucky Dog Ranch is ramping things up with a new website as well. On KFBK.