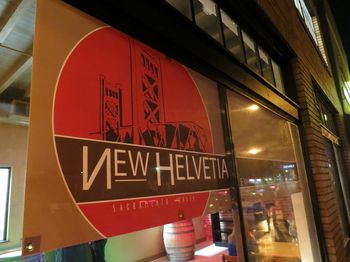 The local brewery scene has really matured in the last couple years. Joining the established Rubicon Brewery on Capitol and River City Brewing Co. at Downtown Plaza are Curtis Park's Track 7 and Land Park's New Helvetia, both of whom are just serving beer at their own locations, and Ruhstaller Beer, a brewer with no retail presence of its own. 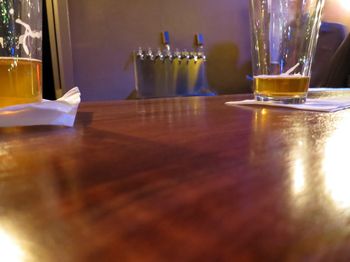 New Helvetia (pronounced hell-VE-sha) Brewing Company at had its soft opening last weekend -- the product of many months of blood, sweat, tears and delays. Located at the corner of 18th & Broadway and across the street from a car wash and a Chinese restaurant, it's not exactly where I'd expect to find what could turn out to be a very popular destination. 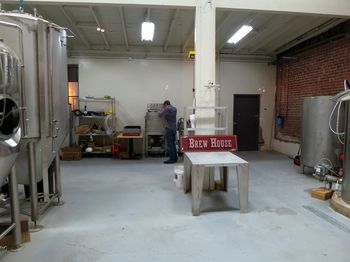 The large L-shaped bar area was filled with a dozen folks who looked like they could have just migrated from trivia night at a different bar. The actual bar is beautiful wood reclaimed from urban trees that have fallen or have been cut down (coincindentally, by an unrelated company called New Helvetia Hardwoods). The bar also features large windows that let patrons peer into the beer-making back room of the brewery. 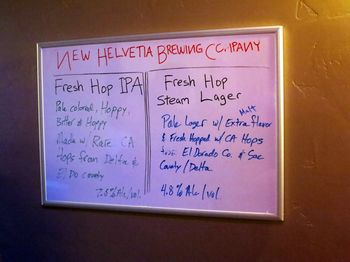 Initially, they only have two beers - an IPA and a Lager. I won't pretend to be a well-educated beer drinker and give a detailed review. I'll only say that I generally like IPAs and found the IPA refreshing and easy to drink and my wife found the lager tasty. They'll expand their offerings as time goes on. As they noted, it was really their opening weekend. It's impossible to pay a visit to the place without comparing it to Track 7 since both breweries serve just their own beer but don't have food offerings yet. After just one visit to New Helvetia Brewing Co., I've can say that I'm a fan of both. Track 7 has a more industrial, warehouse feel that's a great place to drink on a warm Summer day. New Helvetia has the potential of becoming a real bar that should be enjoyed year round. 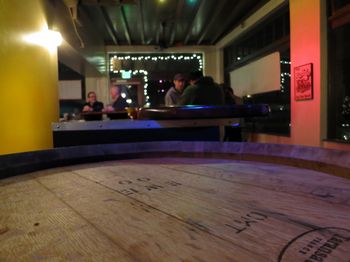 At this time, New Helvetia Brewing Co. is only open Thursday, Friday and Saturdays, from 5 to 8 p.m. Should there be a crowd in the bar, they'll stay open a little later. Check out their Facebook Page for udpates as they add hours.

If you're looking for a new place to drink with real potential, check out New Helvetia. The beer's good, the service is prompt and friendly, and the crowd is really chill.