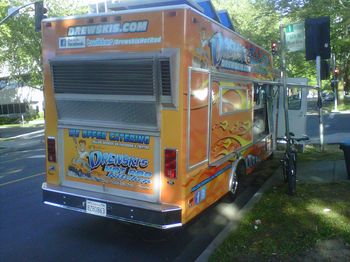 Ms Munchie continues her excellent coverage of the Sacramento food truck scene, this time scooping that Drewski's Hot Rod Kitchen will add a restaurant out in Folsom to complement Republic Bar & Grill.

Drew had been talking about buying a second truck for the last year. He's finally found one, bought it and says it should be ready in about 6-8 weeks. When I asked him if it would be the same menu or a new concept, Drew said he didn't know yet.

He also told me that he's opening a deli location out in Folsom. It's going to be off Iron Point Road in a business park. So you folk on the eastern end of town can finally get a Drewski fix.

VIDEO: Red Rabbit - Cody was in studio with Yoshi from Red Rabbit showing us their 3-course menu for only 30 dollars, part of the annual Dine Downtown Event. On Good Day Sac.

VIDEO: Fat City - We were live with a chef from Fat City to preview their Dine Downtown menu. On Good Day Sac.

AUDIO: Friday Food - Dine Downtown & Mayahuel - It's January. Your budget is a little tight after the holidays. So that's why the Sacramento Downtown Partnership offers up its Dine Downtown promotion this time of year. They want you to eat fine food at an affordable price. More than a dozen restaurants are offering three or four-course meals for $30 each. One of them is Mayahuel, a Mexican restaurant and tequila bar at 11th and K Streets. Owner Senor Ernesto Delgado and "Tequila Maestro" Charles Connolly were in studio with Kitty. On KFBK.