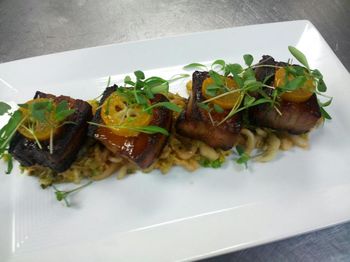 You know an event is big when a scalper greets arriving guests looking to buy and sell extra tickets.

But once all digesting was done and votes were tabulated, one local eatery swept the competition. That would be Magpie Cafe which won a bacon-flavored triple crown: the audience award and both "critics picks" in which each chef was judged both on a strip of bacon and bacon-infused dish. Kelly Hogge, pictured above in a photo from Ryan Donahue, wowed the panel and audience alike with miso cured bacon paired with kimchee and kumquat and a wonderful pastrami bacon. Congrats to chef Kelly and all others for a fine showing.

Read the entire recap in the Sac Bee.

Bacon Fest & Sassy Cocktails at Shady Lady Saloon - Originally dropping in with friends just for the cocktailing, I couldn’t resist ordering up a plate of the chef’s deviled eggs, containing salty bits of house-cured bacon, a tangy dash of Dijon mustard, capers and crunchy celery. They were fabulous – perhaps the best deviled eggs I have ever tasted – and they were the perfect complement to the expertly-crafted Gin Daisies and martinis we were relishing at the bar. Kira O'Donnell in Sac Mag.

VIDEO: Bacon Fest - Patrick Mulvaney showed off some of his food for bacon fest. On Good Day Sac.

Tune in next Tuesday for Adam Pechal's debut on 'The Taste' - The local foodie community was glued to ABC last night, hoping to catch a glimpse of Adam Pechal on "The Taste." As reported in the Bee and seemingly every other news outlet in the 916 area code, the co-owner of Tuli Bistro and Restaurant Thir13en is slated to be on this new cooking competition, which is something like "The Voice" but with chefs instead of singers. Well, last night's debut was pretty anti-climactic for locals, given that Pechal didn't receive any air time. However, these audition episodes of "The Taste" will continue next Tuesday night and Pechal dropped me a note to say he will "definitely be on next week." Chris Macias in the Sac Bee.

AUDIO: Friday Food Featuring Restaurant Thirteen - A local Chef is going to be on network TV. Adam Pechal, the head of the Tuli Group, will be on the premiere of ABC’s new culinary competition “The Taste.” To celebrate, there will be a viewing party at Restaurant THIR13EN.  It takes place on Tuesday starting at 6 p.m. On KFBK.