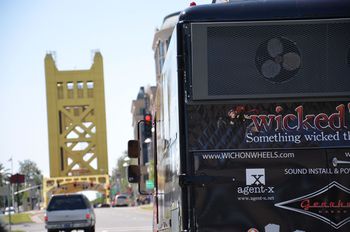 "The mall is one of those places that we feel strongly that a product like the 'Wich could do well," said co-owner Marvin Maldonado. "We can offer something local, a unique product, something fast and even something healthy -- like our barbecue tofu or our vegan selections.

"Like the food truck, the mall restaurant will continue to serve only locally sourced meats, vegetables and breads from the Sacramento region."

Bartender, what's this bacon doing in my beer? - If you've been out and about the last couple of days, you'll know that Sacramento's weeklong BaconFest is in full throttle at numerous pubs and restaurants. We dropped by Pangaea Two Brews on Franklin Boulevard last night after dinner to take part in the experience. I had their now-famous - or instantly notorious - "Suicide IPA," which is a blend of 4 or 5 of the IPAs on tap, garnished with a strip of bacon. An IPA, of course, can have - and should have - plenty of that hoppy bitterness greeting the front of the palate. Sometimes that's balanced with a sweet or fruity finish, sometimes not. The "Suicide" tends to tone things down rather than ramp them up. Blair Anthony Robertson in the Sac Bee.

Magpie's chicken for two is one of Sactown's great dishes - One of my my food-related resolutions for 2013 is to eat at Magpie more often. So, when I heard the great restaurant on R Street was resurrecting its chicken dinner for two, we got there in a hurry. This was one of the first dishes Lynn and I ordered at Magpie, back in those early days when it was pretty much an empty, fledgling restaurant and co-owner Janel Inouye was our server. The chicken back then was a revelation, and it seemed to encapsulate the quality and values that would come to define Magpie...But would the new chicken dish be as good as the one we remembered? Our answer came shortly after the dish arrived at our table. Our expectations were extremely high -- and we were still blown away. And really? Who orders chicken at a top-flight restaurant anyway? But the chicken here was -- and is -- transcendent. The latest chicken for two, at $29, is one of the most impressive and thoroughly enjoyable chicken dishes I've ever had. What's more, I've never tasted spinach done as well as this -- sauteed with great finesse in the drippings of the chicken and deglazed with a cider vinaigrette, the flavors and perfect texture (not too cooked, not chewy or watery) blew me away. Blair Anthony Robertson in the Sac Bee.

Restaurants Turn Camera Shy - When it comes to people taking photographs of their meals, the chef David Bouley has seen it all. There are the foreign tourists who, despite their big cameras, tend to be very discreet. There are those who use a flash and annoy everyone around them. There are those who come equipped with gorillapods — those small, flexible tripods to use on their tables. There are even those who stand on their chairs to shoot their plates from above. “We get on top of those folks right away or else it’s like a circus,” Mr. Bouley said. Helene Stapinski in the NY Times.

Opening a new restaurant in a dying food court in a dying mall that might get bulldozed soon ... Questionable?

But at least their food is good. Today at lunch, however, 3 of the places in the food court were closed, and there were a total of 14 people in the 150+ chairs inside, and 5 people waiting in line for takeout.