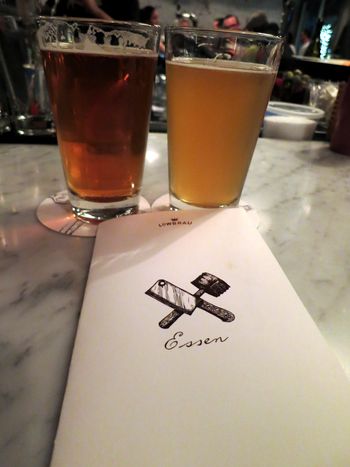 I’ve been excited about LowBrau ever since I learned it was taking over the space formerly occupied by Lounge on 20 at 20th & K streets. While I always had good to great meals at Lounge on 20, it was never clear what they really wanted to be. Were they going to be a night club? Fine dining? An event space? I don’t know if they ever decided.

I was invited to try the place out the night before they opened to the public. The minute you walk in, you realize that the new owners have a definite vision for the place – a German-style beer hall. While, I’ve never actually been to Northern Europe, they’ve recreated what I imagine what a modern beer hall would look like. 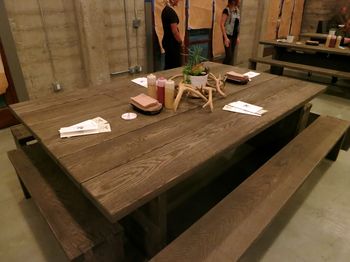 As you enter, there’s a giant mural of their logo on the wall to your right. The majority of the tables are large, communal picnic-style tables, with a very limited number of private tables along the K street windows of the restaurant. Further back, there are long high-top tables, again intended to be shared with strangers. 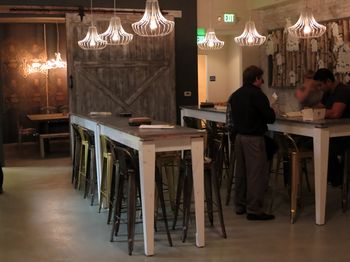 The two of us decided to sit at their U-shaped bar (which probably sat about 20) for a quick dinner and drink. We immediately recognized the bartender from House on Capitol, a restaurant we used to frequent when we both worked in that part of Downtown. The beer menu features 13 different beers on tap, and, if memory serves, twice as many bottled selections. I ordered a very tasty Sculpin IPA, and my wife ordered Ommegang Hennepin, both for $6. Don’t worry – for those of you who aren’t into the craft beer thing, they also serve PBR for $2, and for those who prefer wine, they had a selection of a half dozen wines by the glass including the German varietals of Riesling and Gewurztraminer.

For those who want something other than a sausage on a roll, they do have a limited salad selection – from a $7 garden salad to a $3 roasted potato salad. Since it was in the week between Christmas and New Year’s Day, we opted to forgo the salads during this visit. 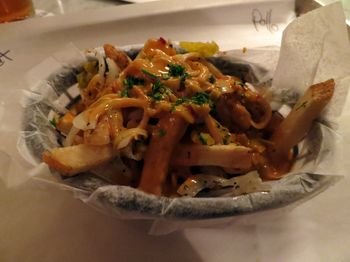 We waited about 20 minutes for our Dirty Duck Fries – a long wait, but one to be expected during a soft opening. I hope this is a kink they work out in the very near future. The fries themselves were excellent, but in no way healthy. Slathered in bier cheese sauce, the Dirty Duck Fries another good example of the Fry Meal trend, as coined by Ms. Munchie. To me, the toppings were a little spicy, but luckily, I had beer to help me wash it down. 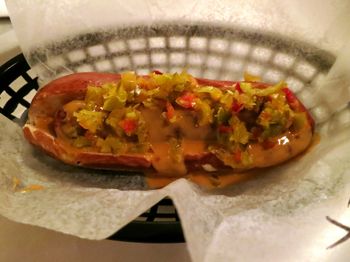 Next came our bratwurst and chicken sausages. The buns were rolls sliced like a canoe, meaning an opening was cut into the bread to place the sausage into, but they weren’t cut in half the way regular hot dog buns are. On the brat, the sweetness of the grilled onions and sweet peppers were a good companion to the sausage with its crunchy casing. It’s just slightly smaller than the the size of a Costco hot dog. I’d guess it took me 7 bites to finish it.

The chicken sausage on the pretzel bread was a real treat. The upgrade to the pretzel bread is absolutely worth the extra 50 cents. They toppings themselves – the spicy bier cheese sauce and the spicy peppers – packed a little too much heat for me. But that’s probably my fault for choosing those toppings.

The excellent sausages are sourced from an outside vendor, and the bartender said that LowBrau eventually intends to bring the production in house. At the conclusion of their meal, we decided to try one of their specialty cocktails – all $9 each. We selected the Belgian 75 ($9) with cognac, lemon, sugar, framboise (raspberry), lambic (naturally-fermented beer). The drink was simply put, delicious, and probably a little dangerous since they don’t really taste alcoholic. It's a good alternative if you don't like the taste of regular beer. (The drink is a takeoff of a French 75, which is topped off with champagne instead of beer.) As of Saturday night, they hadn’t settled on the exact cocktails they would be serving, but much of the staff had worked at Shady Lady, and we can continue expect first rate cocktails in the future. 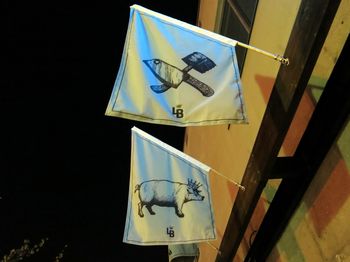 For our two sausages, side of fries, two beers and cocktail, the dinner cost us $50 including tax and tip.

If you want a cheap sausage, go to Costco. But if you want a place that has an unlike any other in Sacramento that combines craft beer with good food and a unique setting, LowBrau Bierhall is worth a visit. I know I’ll be back and soon. 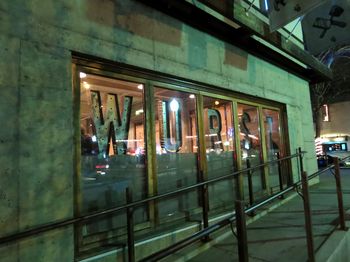 LowBrau is located at the corner of 20th & K streets. They can be found online at http://lowbrausacramento.com/, and on Twitter and Facebook.