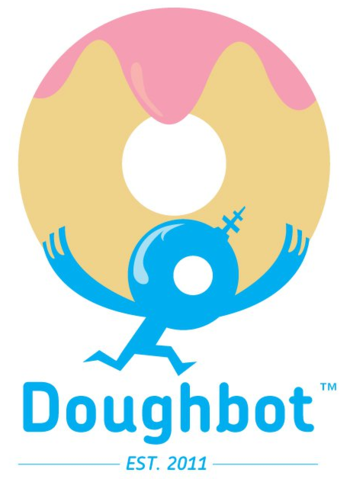 Late last year, Doughbot closed its doors for a week and tweeted mysterously that on a top secret donut mission.

When they got back, they weren't allowed to talk about it, but mentioned they had a good time in Toronto (in a tweet that's no longer online). All signs pointed to their participation in some sort of cooking reality show.

Yesterday, they revealed what it was.

But Cowtown Eats has done some snooping to figure out what that show is. Here's an ad they had looking for contestants for the cooking challenge.

"Doughnut Masters", a new TV series on Food Network Canada seeks culinary professionals from across Canada and the U.S. to appear on a new competition TV series. In each half-hour episode, three culinary professionals from across North America compete to produce the most creative and delicious batches of doughnuts. At the end of each show, one winner returns home with "best doughnut" bragging rights -- and $10,000 cash! Taping of your episode will take a single day. The series will be taped between November 15 and December 15, 2012 in Toronto, Canada. (You will arrive the day before the taping, and leave the day after.) If you are chosen as a contestant for Doughnut Masters and live outside of the Greater Toronto Area or in the United States, we'll pay to bring you and an assistant to Toronto, and for your accommodation and food while you're here. To find out more and apply for the show, contact us now! Location: Toronto Compensation: $10,000

According to the press release issued yesterday, 42 donut shops were selected, with 12 from Canada, and 30 from the United States.

Per the press release, here are the show details:

The battle is on in Donut Showdown as professional donut makers from across North America take the iconic fried dough delicacy to new heights, dishing out their wackiest creations in hopes of devouring the competition and taking home a whopping $10,000 grand prize at the end of every episode. Donut Showdown premieres Tuesday, April 2 at 10pm ET/PT exclusively on Food Network Canada.

Hosted by international food television sensation Danny Boome (The Chew, Recipe Rehab), Donut Showdown brings an expert panel of judges to the diner kitchen to decide which fried treats will make the cut and which ones will cause the judges’ eyes to ‘glaze’ over. David Rocco (David Rocco’s Amalfi Getaway) leads the charge as head judge, joined by fellow esteemed judges culinary expert Maggie McKeown (Recipe to Riches) and popular Toronto restaurateur Zane Caplansky (Caplansky’s Delicatessen).

In each episode of Donut Showdown, the battle begins with three colourful competitors tasked with creating a batch of donuts using three bizarre and unusual secret ingredients. The judges will get a taste of each offering, critiquing each donut on taste, presentation and creativity. The competitor with the weakest donut will be sent home, and the remaining two competitors must go head-to-head in a final battle to make a large batch of donuts based on a theme chosen by the judges. At the end of each episode just one competitor will taste victory, leaving with a sweet $10,000 prize.

Among the confirmed American contestants are:

As of now, only Food Network Canada will air the show, but that doesn't mean that the American network won't pick it up. If they do, we'll let you know when and where you can watch it.

Also, if you're interested, you can watch many audition videos on YouTube (although I couldn't find Doughbot's).

Best hamburgers in the USA: Zagat's picks in 25 cities - Warning: After reading this, you're probably going to crave a nice, juicy cheeseburger. The good news: We'll tell you where to find one. Featuring Squeeze Inn.  Gary Stoller in USA Today.

Armed gunmen take over three North Sac businesses in one night - In the evening hours of Tuesday, February 19, 2013, police responded to three separate take-over-type robberies to businesses in the north area of the City of Sacramento. In each instance, three armed gunman enter the businesses and demand cash. Some of the victims were physically assaulted by the aggressive robbers causing minor injuries. The suspects are described as male Hispanic adults, ranging from approximately 5 feet 5 inches tall to 5 feet 9 inches tall, and approximate weight ranging from 140 pounds to190 pounds. On Sac Press.

Sriracha Hot Sauce Catches Fire, With 'Only One Rooster' - The first thing you smell at the Huy Fong Foods factory in suburban Los Angeles is the overwhelming aroma of garlic, a key ingredient in the company’s signature product: Sriracha Hot Chili Sauce. The first thing you see, however, doesn’t make nearly as much sense. In the lobby is a blown-up picture of two astronauts—one Russian, the other Asian-American—hovering in zero gravity in the cramped confines of the International Space Station. Why it’s hanging there becomes clear on closer examination: An arrow superimposed on the photo points to a little green plastic cap, the top of a Huy Fong sriracha bottle floating in the background. Caleb Hannan in Bloomberg Businessweek.