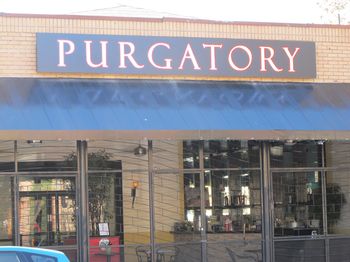 When Purgatory first announced they were opening in May 2012, they made some bold claims. They wanted to be in the same class as Mulvaney's and Ella.

Six months after they opened, they've shut their doors and it looks like the Sacramento food scene isn't going to miss them.

The first sign that things were bad was that Andy Soto, a restaurant consultant whom I interviewed about the restaurant before they opened, sent me an e-mail in June 2012 telling me that he was no longer involved in the company.

After they opened, there were some tepid reviews on Yelp, but it's unfair to expect a restaurant to be hitting on all cylinders when it just opens.

But credit to ranSACkedmedia.com, who have been following the case.

First, they reported in November that employees at Purgator were grumbling that people weren't getting paid.

Over the past week, several people who work at or know people who were involved with the downtown coffee bar/restaurant/dance club known as “Purgatory” have reached out to ranSACkedmedia alleging thousands of dollars in lost wages and widespread wrongful terminations to remove entire crews. The restaurant’s former executive chef,  Dave Brown, says that he is currently pursuing legal action to obtain $35,000 in owed back pay. Brown is now resorting to using food stamps to feed his family, a first for the former Marine who has also run kitchens in Key West, Miami, and Alaska. Several other former employees of Purgatory, who asked to remain anonymous for this story, confirmed Brown’s allegations as well.

Later in November, a Goth group, Club Elysium, said that Purgatory would no longer be the home of their weekly party.

The venue Purgatory is no longer viable as a home for Elysium. As of right now we are closed. My staff and i are currently looking over options. We are looking at other venues and are hopeful we will fund a home for Elysium quickly. It may take us some time but we are working hard to make this happen... Our humblest of apologies. We had little way to see this coming. We took a risk on a new venue and that risk did not pay off. But we are not done. Our scene is strong. My staff and i have learned many lessons and gain much experience from this venture.

In January, a Yelp review said the place was closed.

I wish I could say the food was good or bad, but we never got the chance.  I purchased a Groupon back in September.  We tried to get in, in October, November, December and last night.  Everytime we went they were closed.  The 2nd or 3rd time we went, the guys working there said they were closed for remodeling.  I called in December and the guy who answered the phone said any day they would be re-opening.  Then last night we went and there were very large chains on the door.  The kind of chains the IRS uses when they close down a business.  I called the number in the yellow pages and there was no answer and no recorded message.   I called the number provided by Groupon and it defaults to a generic voicemail.  I had heard rumors that they were closed down due to code violations and that was why they were remodeling.  I was going to give them the benefit of the doubt, but it doesn't look good.  So I called Groupon and they refunded me.  If they ever re-open, they should probably change the name and start fresh.

Reading that Yelp post, I stopped by on a Sunday during brunch, and the place did have chains on it. I thought it was closed then, but thought it *might* just have been closed for that day.

Well, turns out my caution was unwarranted. Per the Sac Bee:

The man who leased Purgatory Restaurant and Nightclub received an eight-year prison sentence after pleading guilty Wednesday to three counts of investor fraud in Sacramento Superior Court.
Donald Dunakin, 42, was booked Monday on 43 counts that included grand theft and false statements, according to court documents.

Dunakin's arrest warrant indicated he accepted investments to his companies - Dunakin Investments, Preferred Diversified Holdings and Platinum Performance Holdings - without a license. Dunakin lost his license in 2009 after allegations that he made poor recommendations, the Department of Justice said.

An investigation of Dunakin's accounts found he solicited more than $1.5 million from investors, many of whom were over the age of 65, according to Dunakin's arrest warrant. Investigators identified 28 people who invested with Dunakin, the document says.

And to confirm that, I purchased the Groupon offered late last year. They just refunded my money since the place is closed.

Thanks for your interest in the Groupon for Purgatory Restaurant & Lounge.

We have heard that some of our customers are having difficulty redeeming their Groupons for Purgatory Restaurant & Lounge because they may have closed.

Our apologies for the inconvenience. We realize how frustrating that can be and we want to make it right as soon as possible. To avoid any further frustration, we have canceled this deal.

I think it's safe to say the place is closed.

What's Happening with the Foodmob? - For anyone who follows the Foodmob Facebook page, you have seen that there's some changes going on. You probably didn't know exactly what, but you could tell things were happening. First, for the public, there is a new website. SacFoodMob.com is all new and includes the daily schedule and more. One section that will be growing is the Store which will sell things like apparel and food stuffs from the trucks, like jams, salsas, and BBQ sauce. But what's more important is what's going on behind the scenes with the truck owners.  In January the leadership team met with all the Foodmob related truck owners and presented them with the new layout for Foodmob. First, it's now a non-profit organization with a tax i.d. number. Money collected via dues and fees will go to things like signs/banners, tables, chairs, awnings, leasing of spaces, website, bookkeeping, etc.  Catherine Enfield on Munchie Musings.

Rail Bridge Cellars to expand with sister restaurant, live music series - As Valentine's Day approaches, we've got some sweet news on the urban winery scene. Rail Bridge Cellars, which operates its tasting room in the Elks Tower penthouse, is on the verge of expanding with a sister restaurant. Look for Rail Bridge Wine, Food and Fine Spirits to open in about three months on the ground floor of the Elks Tower (11th and J streets, Sacramento). As the name suggests, this new eatery will offer small plate food items, an extensive wine selection and retail bottle shop. Chris Macias in the Sac Bee.

Hampton’s on Sutter: Someplace Like Home - On the edge of Sutter Street, the restaurant is in the renovated Donnelly House, a charming two-story built in 1894. Together, its wood interior, soft lighting and living room-styled furnishings create a cozy atmosphere. The crowd was a mixed bag of friends reuniting after work, couples on dates and men watching football. Initially told a 30-minute wait, we fortunately found seats at the bar. Despite a packed house, service was speedy and friendly; the amiable bartender even cracked jokes on his downtime. Jamila B. Khan in Style Mag.

La Huaca: Plates of Peru - La Huaca translates roughly from Spanish into “the temple,” which begins to make sense as one enters a world dedicated to one of South America’s oldest and most storied cultures: Peru. Reed music, Andean pillows and hardback books on Peruvian gastronomy and life greet guests as they walk through the door, and each turn of the head thereafter is delighted with a new decorative charm; ropes used as dividers, glass-blown hurricane ceiling lamps, a backlit wall replete with colored-water filled jars. Although I’m a complete sucker for ceviche (and they offer quite a bit of it!), after spying another server carting out a long plate adorned with colorful offerings, I wanted something a bit more authentic, so my dining partner and I started with the Festival de Causas. A sampling of four of their five different causa options – citrus chicken, marinated octopus, fried chicken and shrimp – adorned the top of a mesa of mashed yellow potatoes and were drizzled with respective sauces. Kelly Soderlund in Style Mag.