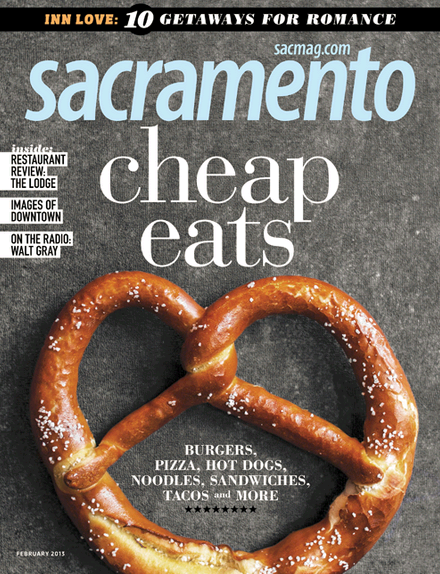 Last week, Sac Mag posted part 1 of their 50 favorite cheap eats. They've posted the second installment, and there are some great suggestions including these five great burgers:

Roo Burger at Cookie's Drive In ($5.50) - COOKIE’S DRIVE IN makes burgers from kangaroos? You betcha. Check out this juicy specimen: a quarter-pound patty served on top of one of the finest buns in town and partnered, of course, with the requisite mayonnaise, lettuce, tomatoes and pickles. 5640 H St.; (916) 457-8353

Cheddar Bacon Barbecue Burger at Taylor's in Loomis ($5.89) - Head to TAYLORS and strap a bib on to tackle this baby—there’s no way to avoid the glorious mess as you work your way through layers of crisp bacon, flavorful beef and cheddar cheese, your chin bathed in vivacious barbecue sauce. Wash it all down with a custom milkshake, a specialty of this Loomis burger joint. 3636 Taylor Road, Loomis; (916) 652-8255; taylorsloomis.com

Skip’s Original Burger at Skip's Kitchen ($8) - SKIP’S KITCHEN is where swank meets oldfashioned burger dining. Sip a glass of Pinot Grigio as you savor this burger fashioned from a hand-packed sirloin/chuck blend. Cradled in a poufy brioche bun, it comes with your choice of cross-cut or sweet-potato fries. Bargain bonus: If you choose the joker card when ordering, your whole party gets a free meal. 4717 El Camino Ave., Carmichael; (916) 514-0830; skipskitchen.com

Grand Junction Burger at Burger Junction ($6) - Plunge deep into the heart of South Sac for BURGER JUNCTION’s famous burger: a one-third-pound patty piled with pastrami, melted cheese and sweet grilled onions and enlivened with an enticing Thousand Islandish sauce. (If you’re an onion ring fan, Burger Junction’s may just be the best in the city.) 7900 Florin Road; (916) 393-4420; myburgerjunction.webs.com

Beer fans line up for the limited Pliny the Younger - To encounter the legendary beer called Pliny the Younger, you need a plan. Your entire day – maybe even your entire vacation – must revolve around getting the timing right. You will want to bring something to read while you wait. A magazine. Tolstoy, maybe. It all depends. But on the day you hope to taste this storied beer, served in 10-ounce pours for $4.50 each and limited to three per customer, you cannot possibly have other commitments. Blair Anthony Robertson in the Sac Bee.

Can you guess the highest grossing nightclubs, bars, and lounges in the US? - If you had to guess, which of your favorite nightclubs would you suppose grosses the most revenue over the course of the year? How much do you think the highest grossing club in the United States makes? A 2012 study sponsored by Technomic, a food industry consulting firm, reveals all to you, dear reader. It’s no surprise that Vegas clubs dominate the top of this list in terms of gross revenue per year, with many clubs in California, New York, Miami, Jersey, and Chicago following up with strong appearances. There are other more surprising entries on the list (who knew Kansas City has a club scene?), but take a look at the full list for yourself below. Note: these are 2012 numbers. You can check back here for 2013 figures as they are released....The Park Lounge – Sacramento, CA $10-15 Million. Cara Daley on Dancing Astronaut.

Two Sweet Breakfast Treats - Sure, eggs and bacon are our go-to breakfast staples, but who says there’s anything wrong with something sweeter? If you’re craving a more indulgent morning treat, try Tower Café’s much-talked-about French toast, which lives up to its legendary status. Dipped in custard and fried to a creamy, fork-tender deliciousness, the rich, satisfying “toast” is a great way to jump-start a busy day. Also featuring Fox & Goose. Kira O'Donnell in Sac Mag.

Enotria taps Russell Eastman to develop cocktail program - Russell Eastman has been hired to develop Enotria's cocktail program for the next six months. Locals may remember Eastman from his days at the now-defunct Lounge ON20, and back then he created an "abisnthe fizz" which quickly became one of my all-time favorite Sacramento cocktails. (That's Eastman pictured above in his Lounge ON20 days). Now, he's a bartender at Bourbon & Branch, one of San Francisco's hot spots for craft cocktails, but will commute to Sacramento and bartend at Enotria on Tuesdays and Saturdays. He'll also be in the house for Wednesday's dinner with Liberman. With Eastman developing Enotria's bar program, look for a wider selection of small-batch and artisanal spirits in lieu of the big brands. He'll be taking advantage of Enotria's kitchen to develop syrups, foams, gastriques and more for a variety of libations. A mock-up of Eastman's menu include's eight house cocktails and four classics. Chris Macias in the Sac Bee.