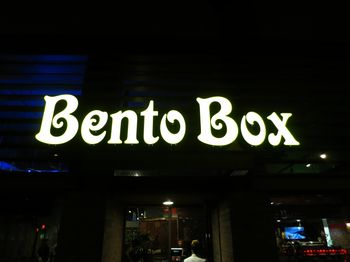 Bento Box opened last week at 16th & K, on a stretch of Sacramento that might be called the Sushi Row (H/T to the Sac Biz Journal, where I first saw the term coined).

To its north on 16th are Mikuni and Zen Sushi. To its south are Nishiki and Kamon Japanese Restaurant.

With such a crowded market, can Bento Box be successful? After my first visit there on Friday evening, I think the answer is yes.

We decided to try a couple different things on their menu to see if they could excel at their diverse menu.

First, we ordered the mixed tempura ($9). 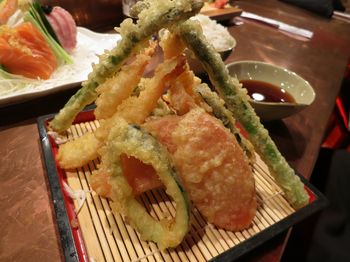 It came with 3 shrimp, a couple spears of asparagus, and a couple pieces of zucchini, carrots, broccoli. In total, we had about a dozen pieces. The tempura was lightly breaded and perfectly fried. It had great crunch and wasn’t oily. The vegetables inside were hot, but not scalding. Turns out they could make fried food. But any fast food chain can make fried food. Time for their next challenge – sashimi. 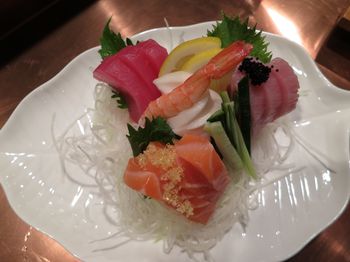 We ordered 9 pieces of sashimi for $14. I’ll admit that I only recognized 4 out of the 5 pieces of of raw fish on the platter, but the salmon, Hamachi and tuna were excellent. The seafood was fresh and the slices were expertly cut by a true craftsman. When we go back, we might just order a plate salmon and Hamachi. That’s how much we enjoyed it. 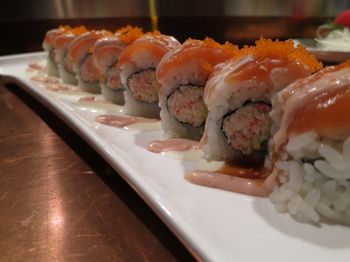 We ended with the Oregon Roll – Crab meat, avocado & tobiko ($10). The roll was good to very good, but honestly, when it’s covered by that much sauce, it’s hard to be able to tell good from great.

The service was a little uneven, but it wasn’t because they weren’t trying. Our order was taken quickly and efficiently. Just as our glasses were about to be dry, they were refilled. The server accidentally charged us for one too many beers, and quickly removed it from the bill when I pointed it out. She also forgot to bring a pen after bringing me the credit card slip to sign. But those are little things that can and I’m sure will be fixed.

The owner Jonathan and General Manager Eddie worked the floor the entire night and seemed to introduce themselves to every table. (The manager says they’ll have a happy hour soon, with a late night happy hour on the weekends. Stay tuned to Cowtown Eats for details.) We happened to sit at the sushi bar and Chef Jimmy was a real treat to sit and watch. He also tipped us off to the fact that they’ll be serving a wild black rice sushi very soon.

Even though they had only been open two days, I really enjoyed my dinner there. We each ordered two beers (two draft Sapporos, a Coors light and a Kolsh for $5 each) and our bill ended up being $68, including tax and tip. It wasn’t inexpensive, but it was probably a couple bucks cheaper than it would have been at higher end sushi restaurants.

Bento Box is definitely off on the right foot. They’re already doing great lunch businesses, their food out of the gate is already top notch, and I’m sure their service hiccups will get fixed. Next time I go, I look forward to trying their udon and bi bim bap.

Bento Box is located at the corner of 16th & K and can be found online at BentoBox-USA.com.

FYI, This is their 3rd Location. I have gone for years to their location in Loehman's Plaza as well as their most recent, on Folsom & 65th.

Went there to day for lunch, 1/2 off rolls mon and tues. Kitchen was painfully slow. Took 40 mins to get the rolls out and the place was only 1/3 full. They've been open too long to still be working out kinks. Thumbs down.