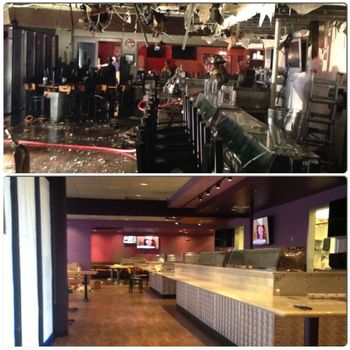 Mikuni's original location in Fair Oaks will reopen this week after a fire damaged the restaurant just before the new year.

Originally, Mikuni staff had predicted it would take 2-3 weeks to reopen, followed by a revised timeline of approximately 7 weeks.

But it looks like it was worth the wait. As you can see in the before and after picture above, they took the opportunity to not just rebuild the space, but update it as well.

The restaurant will reopen to the public on Wednesday, March 6 with its regular menu.

On Tuesday, March 5, Mikuni will host the Mikuni Ignite Party from 6 to 8 p.m. Tickets are $50 and can be purchased online.

For more information about the party, visit MikuniSushi.com.

The whole enchilada at Garcia's restaurant - We stopped by Garcia's the other day, a three-dining-room Mexican restaurant in Carmichael that's part of a 12-store chain, mostly in Arizona. This is the only California location, said manager Lisa Coleman. "They tore down a movie theater that showed 'The Rocky Horror Picture Show' and built us (on the site) in 1990. Everything is made fresh right here," said Coleman, who has been in place since 1991. Allen Pierleoni in the Sac Bee.

Fly Your Carpet Over to Ali Baba's Kabob House - Ali Baba's takes over the small, nondescript place at the corner of 7th & L streets that had formerly been occupied by an Indian restaurant. In its first couple of days I saw it was open and immediately stopped in to try them out...I'm thrilled to see Ali Baba's open and nearby for me to walk to for lunch. I'm sure I'll be visiting Basir and Obaid on a regular basis. Catherine Enfield on Munchie Musings.

'We can pickle that:' specialty food company to open kitchen and storefront in Midtown - Poole and Peters wants to take the brining business to the next level, and have the space to whip up his award-winning Bloody Mary mix. Right now Poole is spending nights and early mornings creating the concoction in Pour House's kitchen, where he's general manager. Before that, he was mixing the blend at Kasbah Lounge's kitchen during the afternoons. Due to increased demand, which likely received a bump after Poole won second place in Absolut Vodka's "Bloody Mary Search 2012," the business needs room to grow. So he's moving Preservation & Co. into a 3,200 square-feet building just around the corner on 19th Street, and building a commercial kitchen. Karen Wilkinson in Sac Press.

Staff picks: Hot City Pizza - Hot City Pizza, a small pizza joint close to Sacramento State’s campus and next to the Greek restaurant Opa! Opa!, is easy to miss when driving by, but hard to forget once you experience a slice of its creative pizza. Richard Anderson, who works at Hot City Pizza, shared which pizza is its most popular. "The Angry Pig pizza is really spicy and personally my favorite," Anderson said. "A lot of people like it." Hope Roberts in The Sac State Hornet.

VIDEO: New Cupcake Flavors - Amy Carabba was with Felicia Wheeler from Icing on a Cupcake with new flavors! On Good Day Sac.