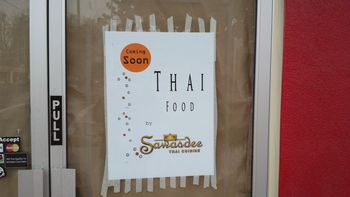 Mongo Mongo, the only Mongolian BBQ restaurant on The Grid, opened in January 2012, and based on its Yelp reviews and Facebook posts, it looks like it closed in late February or early March.

Efforts to contact owner John Ng (no relation to yours truly) via his cell phone, e-mail and Facebook were unsuccessful, so I don't have any insight into why it's closed.

But replacing it will be Sawasdee Thai Cuisine. The windows were covered when I paid the place a visit earlier this week, but I could peek through and see that not much work had been done on the location. Mongo Mongo's unique open kitchen design was still there and the tables were stacked in the middle of the room.

It doesn't look like Sawasdee Thai's opening is immenent.

OneSpeed: An Enduring East Sac Fave - If you want full-flavored, rustic Mediterranean-inspired fare and a big dish of genuine warmth and conviviality, step into OneSpeed - East Sac’s most beloved neighborhood bistro.  Chef Rick Mahan (who also owns The Waterboy in midtown) opened OneSpeed in 2009, and the Folsom Boulevard eatery has been jam-packed ever since. Kira O'Donnell in Sac Mag.

Jin Men: Take comfort - A friend who was born in Korea told me about Jin Men, a restaurant that bills its itself as Chinese but actually specializes in Korean-Chinese (hwagyo) food...I came specifically for the Korean specialties. The most popular of such is the ja jang myun, described as “black bean paste noodle.” Initially, I thought this meant the noodles were made from beans, but the thick chewy noodles are actually wheat based, and the sauce is made of black-soybean paste. Ja jang myun is based on the Chinese dish zhajiangmian (fried noodles with sauce) and is one of the “national foods” of South Korea. Jin Men’s rendition is made with little squares of chewy pork and tiny shrimp mixed with lots of sweet sautéed onions and slightly salty bean paste. We also tried a blander vegetarian version and the spicy noodles, which were fairly fiery. This addictive dish is served in a bowl just the right size to keep all to yourself. It may be one of my new favorite comfort foods. Ann Martin Rolke in Sac News Review.

Middle Eastern cuisine and 'The Kay' to collide - The Kay district in Downtown is about to become home to another business, but this time it's not a bar, club or concert venue. It's a restaurant serving Mediterranean food with Palestinian roots that will take the place of a formerly vacant building. Darna – which means "Our home" in Arabic – is set to open at at 925 K Street in April, if all goes smoothly. It will take the space of Farley's, a restaurant that has been closed for at least seven years.  Karen Wilkinson in Sac Press.

Sacramento Food Film Festival includes talks, tastes - It's a film fest for all five senses. At the second annual Sacramento Food Film Festival, running Friday and Saturday at the Guild Theater, people can see movies, hear talks by filmmakers and experts, and smell, touch and taste food. "We are doing participatory events this year," said Catherine Enfield, a food blogger (www.munchiemusings.net), food truck advocate and founder of the food film festival. "We thought people would get bored just seeing film after film, and we thought we would have a discussion tied to each film." Carla Meyer in the Sac Bee.