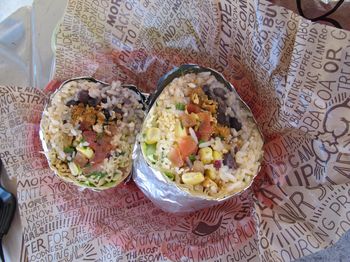 There are two ways that restaurants try to serve vegetarian fare. One way is to use non-meat substitutes and try to replicate the taste and texture of meat. A famous (and much ridiculed) example of this is the tofurkey.

The other way is to really embrace the ingredient, and instead of trying to replace delicious pork, beef or chicken, they make something tasty with that ingredient.

Chipotle chose the later route with their new Sofritas, a new vegetarian option at the Mexican chain.

Sofritas (a word Chipotle marketing invented, but a play on the Spanish word "sofrito" loosely translated as "a culinary combination of aromatic ingredients which have been cut in very small pieces") are made of non-genetically modified tofu made in Oakland. The tofu is shredded and braised with chipotle chilis, roasted poblanos and a proprietary blend of spices.

Well, that's all fine and good, but how does it taste? Last week, I was lucky enough to be invited by Chipotle to try this new ingredient.

As a meat lover, I was ready to find the dish a poor replacement for the chicken, beef or carnitas that regularly adorn my Chipotle burritos, bowls, tacos and salads. Much to my surprise, it was actually pretty good. 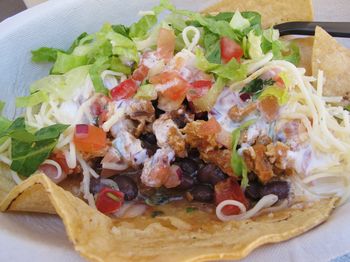 At first, I had the Sofritas as part of a soft taco, and honestly, I couldn't taste it at all. The spices perfectly fit in with the rest of Chipotle's food, and it blended right in. 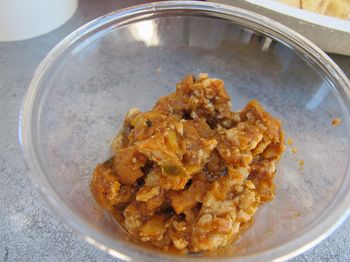 I asked to get a sample of the Sofritas tofu by itself, and it resembled ground beef in a sloppy joe-type sauce. Upon trying it plain, it was a little spicy for my taste buds, but once combined with the other ingredients, it really cut the heat.

While I had their marketing person there, I actually learned a couple really interesting non-Sofritas facts about Chipotle.

They make the majority of the food at the store, starting 3 to 4 hours before they open. That means that avocado is made that day. Rice is cooked and seasoned that day. They use a sous vide on the carnitas to ensure a consistent tenderness. (What other fast casual chain uses sous vide?) Pico de gallo, bell peppers, etc. are all cut by hand and if necessary, cooked by hand.

Sofritas turned out to be much better than I thought it would be. While I still prefer the meat options, because it has nearly 50 fewer calories per serving while retaining all the flavor, I can see myself making the vegan option something I'd work into the rotation.

Sofritas are now available in Chipotle stores in Sacramento region and in all of Northern California (from Visalia to the Oregon border).

Chipotle to debut premium margarita - After reporting a 22-percent increase in first-quarter net income, Chipotle Mexican Grill said Thursday it will debut a new Patrón margarita made with premium tequila and fresh juices at most of its restaurants later this month. While the Denver-based chain has long offered beer and margaritas made with a mix in some locations nationally, the new version will feature made-to-order cocktails made with Patrón Silver tequila, blended with Triple Sec, fresh lime and lemon juices and organic agave nectar, and served on the rocks, the company said. Priced between $6.50 and $8, depending on location, the cocktail will be available at about 900 of the chain’s 1,458 restaurants starting April 29, in time for Cinco de Mayo. Lisa Jennings in Nation's Restaurant News.

Chipotle Introduces ‘Sofritas’ - “Chipotle’s new menu item” is something you don’t hear often, simply because if it ain’t broke don’t fix it. In all seriousness, Chipotle has been around for 20 years and they have perfected their mantra of ‘Food with Integrity,’ meaning they value quality over quantity. So when we were invited to sample their new menu item, exclusive to Northern California, we jumped at the opportunity.  Jake Ferguson, Sara Ortega and Ana Marie Aguas on Sac Foodies.

Chipotle Testing out New Veggie Menu on Sacramento - Chipotle is testing out a new vegetarian menu on Sacramento. “In Sacramento, we know what good food is,” said Nicole Rogers, a marketing strategist for Chipotle. That’s right, we do. Marin Austin on FOX 40.

Chipotle Revisited - As far as I'm concerned, Sofritas is a game changer. I've eaten at Chipotle many times over the years, but mostly just because I happened to be with non-vegan friends or family who wanted to eat there. While I appreciated the fact they had something on the menu I could eat, their vegan options weren't all that interesting. Adding Sofritas to their menu completely changes my view of Chipotle. Now it's a restaurant I'll visit on purpose and often. Pam on Sac Vegan.

VIDEO: Tofu at Chipotle - Courtney was live at Chipotle, checking out the new tofu option. On Good Day Sac.

Also, I doubt they made avocado at the restaurant.