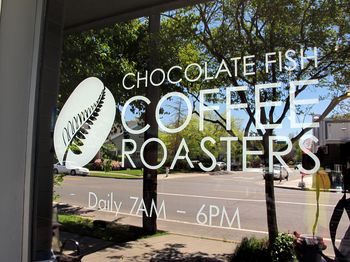 Chocolate Fish Coffee, a much beloved coffee roaster and cafe which until yesterday had only location at the corner of 3rd and Q, opened its second location on Wednesday.

Located at 47th and Folsom Blvd. in East Sac, Chocolate Fish Coffee is adjacent to Hilltop Tavern and across the street from OneSpeed Pizza.

I paid a visit to the new location yesterday during my lunch hour and found the space to be absolutely gorgeous. Compared to Chocolate Fish's downtown location, the East Sac building is much larger, with about 50 percent more indoor seating.

In a short interview with one of the owners, Edie Baker, she said that the new location would house both a cafe and venue for roasting. While others might roast their coffee on site, Chocolate Fish Coffee was unique in that it didn't try to hide it in a back room, but rather plans on showcasing it, sort of like an open kitchen showcases food preparation at a restaurant. 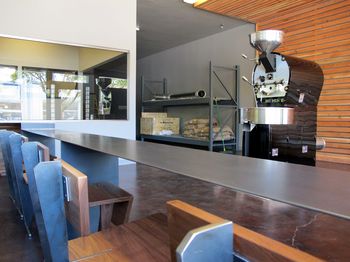 While employees will rotate between the Downtown and East Sac locations to keep their excellent culture and service consistent, there will be slight variations between the two cafes. 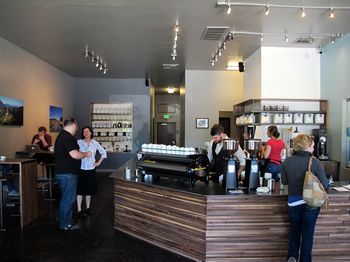 While the last couple years brought consistent news of restaurants closing due to the poor economy, it's great to see more and more businesses expanding and adding second locations as the economy slowly recovers.

Tasty grits find their place in Sacramento dining - In recent months in my role as restaurant critic, I've noticed grits turning up on menus at some of the most dynamic restaurants in town. Besides the smooth and mildly flavored grits at Magpie, I have tasted them at Mama Kim Eats, Hook & Ladder, Taylor's Kitchen and The Porch. They're also on the menu at Hoppy Brewing, which serves "spicy Georgia cheesy grits" with eggs. In Nevada City, Ike's Quarter Cafe is big on grits. "We love them," said Kim Scott, co-owner of Mama Kim Eats, which offers a New South-Cajun fusion cuisine. "We get a lot of people from the South who come in specifically because of the grits." The grits at Mama Kim's, like those at several other top restaurants in the area, come from Grass Valley Grains, where farmer Reed Hamilton grows a small selection of crops on 50 acres and then grinds the corn into fresh cornmeal. Blair Anthony Robertson in the Sac Bee.

Lucca celebrates 10th anniversary with fund-raising dinners - Lucca, the ever-popular midtown restaurant, is marking 10 years in business with its third fund-raising dinner (of a scheduled four) Wednesday at 6:30 p.m.. Appetizers and wine will begin at 5:30 p.m. The five-course dinner is $100 and includes wine and beer. There will also be a fashion show featuring the designs of Phoebe Verkov. Blair Anthony Robertson in the Sac Bee.

Dickey’s Restaurant Opens Thursday In Natomas - The first 100 customers through the door tomorrow at the new Dickey’s restaurant in Natomas will receive a free pulled-pork sandwich. The new barbecue restaurant, first reported in February by THE NATOMAS BUZZ, opens for business 11 a.m. on April 18. On The Natomas Buzz.